I recently filmed a segment  for an upcoming episode of “Who Do You Think You are?”  – don’t ask, can’t tell – and found the old itch acting up. Years back, I did two series of “The Genealogy Roadshow” on RTÉ and that same old urge is still there to jump up and down and shout, “Look at me, Ma! Look at me!”

Thinking back, watching the finished shows was very different indeed to making them. Stories that had been just problems to be solved or lines to be remembered during filming became intensely touching when the camera showed the depth of the feelings produced in the participants. I’m thinking of the astonishment and joy of the American family meeting a completely new branch of their family in Ireland, of the woman seeing a photograph of her grandfather for the first time and recognizing her own face in his, of the family finally imagining in dramatic detail how their grand-uncle fought and died in the First World War.

The real lesson of the series was one already known to anyone who has done any genealogical research, a lesson not treated with enough respect by shows that depend on celebrities to hold the viewers’ interest. There is an endless variety and a recurring fascination in the family stories that stretch back behind absolutely everyone, however humble. To retrieve and reconstruct these stories can evoke the dense skein of everyday history as if it were our own experience and let us feel its detail in ways that no other form of research can match. 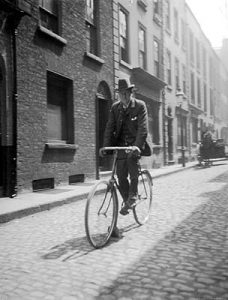 On a personal note, though, I remember being a little disappointed. Years ago, children in Dublin used to annoy cyclists by shouting out helpfully as we pedalled past, “Hey Mister! Yer back wheel’s going round!” I had been hoping to hear some of them in the street shouting after me, “Hey Mister! Where’s me granny?” No such luck.

7 thoughts on “Where’s me granny?”