One of the first lessons you learn as a genealogist is that all names are equal. So you keep a straight face when you come across ‘Gelida Winterbottom’ or ‘Annette Curtin’.

Still, there are names that stick in the memory. I first came across Hindenburgh McHugh about ten years ago doing quality assessment on the Dublin city twentieth-century voters’ lists. There he was at 10 Glenbeigh Road in Cabra in 1939, large as life. Clearly, he had been christened during the First World War by parents who were not on the side of the Allies –  Paul von Hindenburg was the commander of the German Army from 1914 to 1918. This was a noisy raspberry blown in the face of Britain, the equivalent of calling a child “Winston” in Nazi Germany.

A name like that should jump out of the birth registrations. But no, not a trace. So I asked myself how else would someone use a registration for protest. Insist on the Irish language? Sure enough, there he was on February 15 1915, ‘Hendenburg Michaél Mac Aodha’, son of Michaél Mac Aodha, Linotype operator, and Eilis née Ní Dubhda. Two noisy raspberries to Britain.

An Irish-speaking anti-British printer in Dublin in 1915? You can almost smell Sinn Féin. And there in the militaryarchives.ie pensions collection was a 400-page file relating to the battles of Michael’s widow to secure a pension. He died in 1924 from TB contracted when he was imprisoned at the end of the War of Independence, having fought in North King Street in the Easter Rising. Her campaign was eventually successful and the process produced enough material for a full-scale biography.

But what of Hindenburgh himself? The name appears only once in the voters’ lists, in the very earliest surviving volume. But a ‘Michael McHugh’ appears in Glenbeigh Road later in the 1940s. The Second World War was very different to the First. Perhaps it might have been more politic not to have the name of the man who had invited Hitler to become Reichskanzler. Or maybe he just got fed up with the hassle. The Johnny Cash Boy-Named-Sue school of child-rearing can be very tiresome.

A search of death records up to the 1960s turned up a Michael McHugh of about the right age registered in 1964, listed as “Manager, Case room, Irish Press”.

The Irish Press obituary (at irishnewsarchive.com) included a photograph and a full account of his own life and of his father’s part in the War of Independence. No mention of his first name, though. 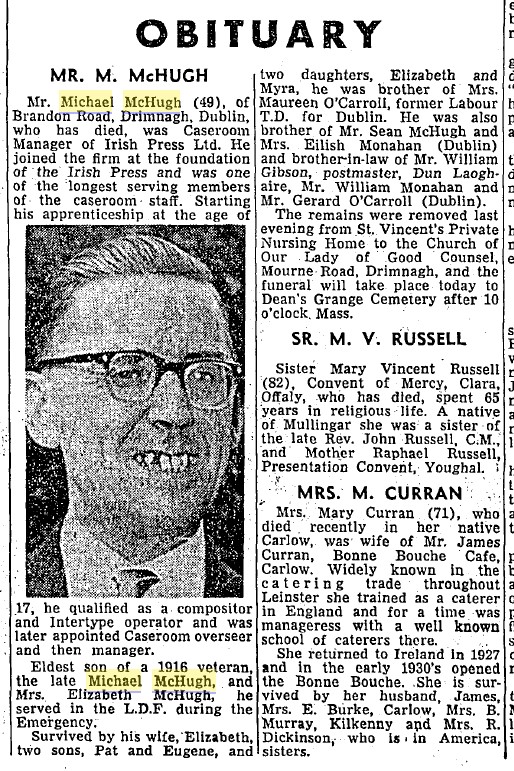 There are two lessons. First, if you want your descendants to be able to find you easily, call your children something conspicuous. I suggest “NotDonald” or “NotBoris”.  Second, I appear to have too much time on my hands.

[ A guest post by Tony Hennessy, a friend and a colleague in Accredited Genealogists Ireland who specialises in magnificent bespoke family trees. See the end of this post for an example. His work deserves to be much better known and he should be stinking rich. More at his FaceBook page.]

Once upon a time, not so many years ago, it was believed by some that to have a family history worthy of exploration one must be in possession of a large country estate, a glorious military career or at the very least a double-barreled surname and a magnificent moustache.  Happily we have discovered in more recent times, with the help of television programmes and the wonders of the internet, that every family has a story to tell.  That being said, many stories simply remain untold and become lost to posterity.

I’ve been engaged of late with a group of Traveller men from Pavee Point, investigating their family histories and recording the results in the form of large family tree charts.  While the process is both enjoyable and fascinating, the business of researching Traveller genealogy can also be challenging, to say the least.  Where a ‘countryman’ like myself may expect to find their ancestors firmly ensconced in the parish and townland of origin for two, three or more generations a Traveller family might include ten children baptized in six different parishes in four different counties!  And don’t expect to find them in the 1901 or 1911 censuses.  Only the most zealous of census enumerators ventured forth beyond the confines of bricks and mortar to include those living in barrel-top wagons and makeshift shelters in camps and along the byways of Ireland.

Another challenge is the limited amount of surnames – and first names too.  How many Martin McDonaghs or John Reillys can one family contain…?!  It may be for this reason that Travellers might refer in conversation to ‘Mikey’s Martin’ or ‘Oul Davy’s Mainey’s John’, not unlike native speakers of the Gaeltacht areas, the name becoming a miniature family tree in itself. For the same reason nicknames are also quite common and so I’ve met Bullstail, Fewsticks, The Needle Collins and the Longtail Quinns and others along the way, all of whose soubriquets we’ve included on the family trees.

Those who died in tragic circumstances or children who died in infancy are so often part of a family’s story, whether they be Travellers or settled people, and while their names may be rarely spoken they – and maybe their photograph – can find a home on a family tree. As well as a genealogical record of one’s ancestors, a family tree becomes a Document of Remembrance.

It is a striking fact that over the course of just one generation the traditional nomadic way of life of the Travelling people has simply ceased to exist.  Today’s older generation, whose lives have straddled two very different worlds, are a rich repository of living history and folk memory – and a wonderful source when compiling a family tree – and it is important that their first-hand accounts of Traveller life from that earlier period are not lost as time inevitably rolls on.  The story of the Irish Traveller is an intrinsic part of the Story of Ireland itself.  On 1st March 2017 the status of the Travelling community as an ethnic minority within the Irish Nation was finally recognized by the State.  And there is a Bill currently working its way through the Dáil which, if passed as expected, will include the teaching of Traveller heritage and history as part of the school curriculum.  These are big steps along the road to a more understanding and inclusive society and are very much to be welcomed.

At the request of the National Library of Ireland the three completed family trees will be presented to the NLI.