After Independence, official Ireland understandably set about undoing the grievous distortions wrought on Gaelic surnames by English-speaking administrators. Every surname now had to have an official Irish-language school version, on the basis that we were all Gaels and had had our original names stolen from us.

For the purposes of officialdom, my father became Mac Grenacháin; when I went to school, I became O’Grianáin; my son was later dubbed Ó Gréacháin.

Never mind the tunnel view of history and the hair-raising presumption that Ireland was racially pure, the implicit understanding of surnames was simply nonsensical.

Because the most important fact about all surnames is that they are words. They don’t have DNA, go to any particular church, salute flags, vote or fight. They simply swim in the ever-changing sea of language, evolving as all languages do under the pressure of accents, education, fashion, politics, economics.

For example, the American pronunciation of the surnames Cahill (“KAY-hill”) and Mahony (Ma-OWN-ey) often has Irish people sniggering up their sleeves. But these pronunciations are much closer to the original Irish-language versions of the names (Ó CATHmhaoil, Mac MaTHÚNa). The fork in culture between Irish-America and Ireland preserved something over there that we over here have anglicised more thoroughly.

Whether American or British, the language Irish surnames have swum in for almost two centuries is English. Seen in this light, the 20th-century Gaelicisation of surnames, the great wave of adoptions of O’s and Mc’s, was not the reclamation of something lost but a further evolution, a flawed reinvention of an imagined past – ask Theodore O’Kechuckwu, living at 1 Washington Street in Dublin in 1949.

The evolution of surnames has not stopped, though it has slowed, not just in Ireland but throughout the developed world. Mass literacy and computer technology have make it more difficult for change to occur – simply seeing your name in print on a computer screen every day lends it apparent permanence.

Apparent only: I have no doubt that in a few centuries people will look back in amusement at our qnt srnm spllngs.

Post-colonial nit-picking aside, TNA (even the acronym is annoying) is a wonderful and much under-appreciated resource for Irish research. Apart from British Army records, now largely available online on FindMyPast.co.uk and ancestry.co.uk, huge quantities of the records produced by imperial administrators in Ireland found their way back to London. For someone used to working with Irish records in Ireland, TNA’s vast, densely-populated archive series, many spanning multiple centuries, are simply stunning, like visiting a cathedral after a life spent in a cave.

The biggest problem has always been that the Archives is in London. Improving access is a long-standing priority and over the past decade, the online catalogue (discovery.nationalarchives.gov.uk) has become an extraordinary research tool in its own right, summarising in miniature many of the originals. After using it for years, I began to mine another generous feature, the “digital microfilm” service. TNA has digitised thousands of microfilms and is making them downloadable for free.

They are elephantine PDF files, slow to arrive and searchable only by hand, just like the microfilms themselves. But you don’t have to trek to Kew to see them. Among the records relevant to Ireland are Admiralty and Coast Guard records from 1816, the printed annual Army Lists, detailing every officer in the army from 1754, and the General Register Office Indexes to Foreign Returns of Births, Marriages and Deaths 1627-1917.

It has to be said that the site (deliberately?) makes the digitised films very awkward to get at. Start from the full list, read the accompanying step-by-step instructions very carefully,  and then just keep burrowing.

Whatever its flaws, this is genuine public service. Irish institutions please copy.

The clearance of the National Archives census correction emails backlog is approaching the half-way point, making it a good time to draw breath and take an overview.

I’ll have processed around 50,000 of the 100,000 emails by the end of June. Most of them cover multiple records, so they include about a quarter of a million suggested changes in all. So far, half are turning out to be accurate, a third are duplicates (corrections suggested more than once), and only 15% are downright inaccurate.

The accurate are going live in monthly batches on census.nationalarchives.ie, around 60,000 so far. Keep in mind that these corrections are exclusive to the NAI site – you won’t find them in the copies of the 1901 and 1911 censuses licensed by the commercial sites, Ancestry, FindMyPast and MyHeritage.

Most of the inaccurate suggestions are people trying to correct their ancestors’ mistakes, a self-evidently fruitless task. There are one or two along the lines of: “Forename: Dick; Surname: Head; Occupation: Nazi”, but a lot fewer than I expected. The vast majority of people take the accuracy of their ancestors’ records very seriously indeed. In some cases, so seriously that they go back every six months and enter the corrections again, hence the many duplicates. Patience, please.

In case you’re wondering, I’m not ploughing through every single email by hand. Extracting the suggested corrections into a database has made it possible to identify (some) duplicates programmatically, to pick out common errors, to weed out spam, to concentrate on corrected occupations only … In the end, though, it does come down to comparing the image with the suggestion. So really all I’m doing is varying the angle of attack in order to preserve my sanity. My dog has his doubts about how successful the effort has been.

Sanity is also the pretext for my growing collections of gems. They’re not all transcription errors, though some of those are wonderful. I’m really hoping for a revival of the fine old Edwardian occupation of “penis tuner”,   and there’s no doubt a Trekkie fan of Mr. Sulu transcribed all those nuns as “Members of the Mr Suline Order”.

But some of the returns themselves give a nice flavour of the people they record. Hugh Holmes, the Lord Justice of Appeal in 1901, has four unmarried daughters in their twenties. He evidently feels the burden: under “Occupation” for all of them he enters “They toil not neither do they spin“. Edward Small, aged two in 1901, seems to have been teething. His father enters his occupation as “A Bawler“. And Bridget Cronin, the spoilt only child of John and Nora in Crohane in Kerry, is recorded as a “Bold Pet“.

From Britain’s point of view, the 1800 Act of Union was primarily a defensive measure to secure its western flank against the French. But after the defeat of Napoleon in 1815, the London government found itself in charge of a country of which it was profoundly ignorant. So, with true industrial-age logic, it set about creating official machinery to quantify Ireland and make it governable. Almost all surviving early 19th-century research sources emerged from this process: the Ordnance Survey, the Valuation Office, the censuses of 1821 and 1831 and much more.

One part of that administrative machinery, the Poor Law, is still with us. In 1838, 135 Poor Law Unions were created, covering the entire island. Each Union had an urban workhouse at its centre, responsible for providing the most basic and grudging short-term relief to the utterly destitute.  The Unions were designed to be self-financing. The obligation to be pay for themselves overrode all others, and that is why they ignore county and parish boundaries – the area each one covered had to produce a similar amount of tax. 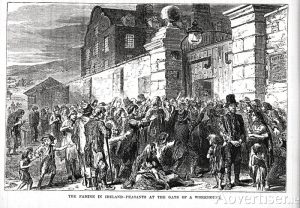 Property-owners in each Union paid the tax and in return could elect representatives to the Union’s Board of Guardians to oversee spending. So from the start, the Unions were geographically a hybrid of health service catchment area and electoral constituency. And, weirdly, that geographic hybrid exists even now.

For elections, the Unions were subdivided into District Electoral Divisions (DEDs), the areas used for the 1901 and 1911 censuses: those DEDs are still unchanged and in use in contemporary elections in rural areas.

Then, when universal registration of births, deaths and marriages began in 1864, the public health service took on the job. So subgroups of the DEDs were gathered into local registrar’s districts or “dispensary districts”, with anywhere from five to ten DEDs in each one. The Union was euphemised as a “Superintendent Registrar’s District”.

The Department of Health is still in charge of civil registration today. And after almost 200 years, its Superintendent Registrar’s Districts still largely cover the areas laid down by the old Poor Law Unions.  They haven’t gone away, you know.