One of the strongest drivers of genealogical research is the satisfaction of retrieving people who have been forgotten or deliberately written out of official history. That sense of righting historic family wrongs is powerful and addictive.

Here are two stories to illustrate why.

One famiy’s 1911 census return listed a 16-year-old son who had disappeared completely from family stories. It turned out he had enlisted in the Royal Dublin Fusiliers in 1915, and somehow survived Ypres, gas attacks and three solid years fighting in the British Army on the Western Front. But the Ireland he came back to in 1919 had changed completely. His family, now staunch Republicans, refused to have anything to do with him.  So he moved to England and broke off all contact. Three generations later, his English grandchildren were tracked down and reintroduced to the wider family.

In another family, the only surviving photograph of one set of great-grandparents had a bizarre flaw. Where the great-grandmother’s face should have been, there was only a blank disk. Someone had very deliberately cut her from the picture.

For years, the family wondered what it was she had done to deserve such obliteration. Then a genealogist sifting through a deceased second cousin’s attic came across a locket and realized the photo it contained was the missing face.

Far from trying to eradicate her memory, one of her children had taken the piece of the picture to remember her by. And now her face was restored to the photo and became visible for the first time to her descendants.

Those of us who give genealogical advice sometimes joke that the job is equal parts genealogy and psychotherapy. But the healing provided by family restorations like these is genuine.

I’ve just started a new service here on the site, interactive surname maps of all Irish Catholic baptisms. They’re nice to look at and certainly confirm just how localised (some) Irish surnames are. But how useful are they?

Like everything to do with Irish genealogy, the answer is that it depends. In cases where you need a quick grasp of how common or concentrated baptismal records for a particular family might be, the map is your only man.  Once again, a decent picture is worth a thousand words.

I also like having click-through lists of variant spellings and totals, making it clear where the pitfalls are and how big they are. The variants also show just how localised some spelling variations can be, a valuable potential clue to a place of origin.

And of course being able to click straight through to the FindMyPast transcripts and the National Library microfilm images is the ultimate lazy shortcut, always welcome.

Flaws? I know where most of the bodies are buried, and I’m not telling.

Suffice to say that the transcriptions on which the maps are based can only be as good as the microfilms they’re based on. Which can be dreadful. And the variants are mine, not FindMyPast’s.

My heartfelt thanks to FindMyPast for sharing the data with me so generously. Unlike other large genealogy companies, they make a particular point of being collaborative, and this is spectacular collaboration. And particular thanks to Brian Donovan and Fiona Fitzsimons, the principals of Eneclann and the Irish faces of FindMyPast. Eneclann is now in its 20th year, a record for any commercial Irish genealogy company. It’s not an accident that they’ve lasted so long. Their commitment to high standards and sheer dogged hard work has earned them everything they have.

Like most public online family trees, those at ancestry.com  include horrors that beggar belief: children born before their parents, the same individual on multiple lines, people married at the age of two. Looking through Ancestry’s FAQs for an answer to a question these trees frequently make me ask – “Why? Dear God, why oh why?” –  I came across a statement that gave me pause: “Many members have family trees that are not yet finished”.

Mmm. Well, yes. Because what exactly would a finished family tree look like? The Mormons, in their sunny optimism, aim to unite the entire human race into a single tree going back to Adam and Eve but they still have a way to travel. For the less theologically inclined, such a tree would have to reach back at least 3.8 billion years to the organism that is the last universal common ancestor, our cenancestor. Even then, would it be “finished”? What about the origins of the elements making up that organism, and the origins of the sub-atomic particles making up the elements?

I always knew genealogy would eventually lead to theoretical particle physics and the eleven dimensions of the space-time continuum. Beam me up, Scotty.

And I’m sure some of my relatives immigrated from dimension seven.

The point is that, like families, family histories don’t come to neat conclusions and never proceed in straight lines. Research is always episodic: a day’s exploration here, an evening online there, visits to out-of-the-way archives tacked on to weekends away . Genealogical research means forever starting again. Plan for that. Record whatever you search (not just whatever you find) in a way that will make it easy to remember when you pick it up two years later. Otherwise you’ll have to do the research again.

And don’t expect to finish, whatever ancestry.com says. Your tree will always be gloriously messy, its loose ends dangling all over the place, an eternal work in progress.

Think of it as leaving something for the next generation to discover.

No matter how familiar a record source appears to be, it can always surprise.

It took me three decades of staring at Griffith’s Valuation, the main mid-19th century Irish census substitute (see askaboutireland.ie/griffith-valuation), to realise that its place name spellings are all identical to those in the standard reference, the 1851 Townlands Index. As anyone who has dealt with the infuriating volatility of Irish townland spellings will know,  this can’t be a coincidence. The only conclusion is that both the Index and Griffith’s share the Ordnance Survey as a common standard source.

The practical implication for a researcher is that once the 1851 Townlands Index spelling is identified, that’s how the place name should appear in Griffith’s. That’s what made it possible to create a direct click-through from place name to Griffith’s on this site – see the places listed for Kilkeevin, for example.

So what about the other great spelling-variant problem, Irish surnames? Is there any evidence that Griffith’s standardised surnames as well as place names? Yes and no. For literate individuals, the rule seems to have been that the version recorded should match that supplied by the individual himself. After all, Griffith’s is a tax survey.  A misspelt surname is an most obvious loophole: you have to be sure you have the right goose before you can start plucking.

For the illiterate or Irish speakers, the same motivation seems to have produced a limited local form of standardisation. While the front-line valuers might record a name as “Curlie”, “Curly” or “Corly”, the higher-ups responsible for the published version would correct to a single standard. So all who could not write their own name in English became “Curley”.

It has to be said that this is not a very useful research tool – the advice must continue to be simply “cast the net as wide as possible”. But for larger-scale population and surname studies, that localised standardisation has one useful side effect. It exaggerates the visible concentrations of anglicised surnames, providing useful prima facie evidence of clan or sept origins.

Have a look at all those Curleys, for example. 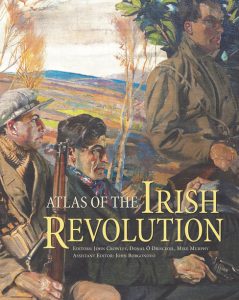 Like many Irish people with a taste for history, I woke up on Christmas morning to find my stocking stretched to bursting by the latest  production from Cork University Press, The Atlas of the Irish Revolution.

The reaction to the book in Ireland has been amazing: the Bord Gais Irish Book of the Year, the Joe Duffy Liveline Listeners’ Choice, a collection of reviews that would make a saint blush, the first printing selling out within a few weeks. And the thing itself really is extraordinary.

Ten separate sections deal exhaustively with every conceivable aspect of the period between 1916 and 1923:  from the nineteenth-century roots of the conflict, through detailed local and national accounts of the War of Independence and the Civil War, and on to analyses of cultural depictions of the period in Ireland and abroad. No fewer than one hundred and five individual scholars contribute, a Who’s Who of Irish cultural and historical studies, making it as much encyclopedia as atlas. And the visual presentation is stunning, with many freshly discovered photographs and publications.

But, but, but … I can’t help feeling something has gone too far. The paper is the heaviest and glossiest possible. The colour printing is the best money can buy. The scholarship is superb. The cartography is dazzling. The binding is superlative. But it’s not possible to actually read the thing.

The page size, 299 x 237mm, is standard coffee-table, good for graphics but hard to manage physically.  Nine hundred and eighty-four of those pages is just too much. But the main problem is the weight. On my bathroom scales, it comes in at 5.1 kilos (11 and a quarter pounds). I’ve tried reading it in bed, in an armchair and sitting at a table, and had to give up each time. What it needs is a lectern.

CUP has produced the most beautiful book-like object imaginable. But it fails the first test of being a book, that it can be read.

I feel a bit like the boy in the parable of the emperor’s new clothes, except in this case the new clothes truly are magnificent. The problem is that they blot out the emperor .