No matter where in the world your ancestors came from, genealogy eventually shades off into local history. Because of the destruction of so many records in 1922, in Ireland we reach that point much sooner than most other places. I recently reached it myself.

The problem was to interpret records from an early baptismal register from Killian parish in east Galway. Over the first three decades of the 19th century, dozens of families of the same name were recording baptisms, using and reusing a tiny number of forenames. To cap it all, many of the placenames were not listed in any reference sources.

On examining property records and maps, it emerged that there were actually multiple small rundale villages spread over three townlands. Rundale was a tradition of land sharing very close to medieval European practices, which lasted in Ireland up to the mid 19th century and beyond. Small strips of land were co-operatively managed by extended groups of up to 20 or so households, and periodically redistributed. It was deeply uneconomic and loathed by landlords, but the people involved led an intensely rich communal life, with a wealth of traditions, musical, verbal, folkloric, culinary.

Looking at the 1830s map of these mini-villages, some things became clearer. At last I understood the extended family’s weird long-standing attachment to an apparently nondescript patch of East Galway.

It also became clear that I was never going to be able to sort out one family from another with baptismal records, or indeed ever. My idea of what makes up a family just didn’t apply. Looking at the villages on the map, with their tight nets of in-facing houses, vegetable gardens and outlying fields, I could see these people working, dancing, telling stories, intermarrying generation after generation, with intermingling lives that did not have the boundaries that I take for granted.

I’m pretty sure I’ll never uncover the names of the direct generations before 1800.  But there’s plenty of compensation in the vivid sense how they lived.

Archivists are an austere and lofty bunch, forever struggling with the contradiction between preserving their beloved records and having to make them available to the grubby-fingered public. And utter impartiality is required  – that collection of 1930s postcards has to be just as important as a set of medieval royal charters. 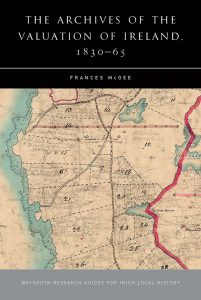 So it is a rare and wonderful day, the archival equivalent of Stockholm Syndrome, when an archivist is captured by a set of records and devotes herself to understanding and making them intelligible. That seems to have happened to Frances McGee, former director of the National Archives of Ireland, and the result is her extraordinary The archives of the valuation of Ireland, 1830–65 (Four Courts Press, 2018).

More than any other set of Irish records, the manuscript maps and notebooks that predate the publication of the Primary Valuation are difficult to grasp in their entirety. Partly, this is because they can be very technical, concerned with producing a uniform property-tax base across the entire island under difficult and changing physical and legal conditions. Partly, it is down to the records having been held by different institutions. For researchers, there can seem to be a bewildering plethora of overlapping record-types.

As in the parable of the blind men trying to describe an elephant by touch, we have until now only been able to understand parts of the collection. Frances McGee shows us the full magnificent beast.

Parts of her book are painful but necessary, a systematic analysis of each of the class of notebooks produced at each stage of the different valuing processes. But the pain is well worth it. Finally it is possible to see how and why they all relate to each other.

The section on Valuation maps is a revelation. The notebooks were only one part of the valuing process – the field and office maps were absolutely central. Once NAI completes the conservation and digitization of its more than 12,000 valuation maps, there is no doubt they will revolutionise Irish local and family history before 1865.

The book comes to life when the author allows her enthusiasm for the documents’ worms-eye view of pre-Famine Ireland to shine through, quoting numerous examples: one valuator’s description of the state of a building in Ballina, Co. Mayo in 1841:

“This was used as a cholera hospital and in consequence could not since be let as a dwelling. Is now let to the hunting club for the huntsman and the offices as kennels”;

“a place of no trade and only two fairs in the year”.

The townland of Ballyrune in Limerick in 1849:

“All the tenants in this townland were ejected on 1 April 1849.; There is no part of the land at present occupied.”

My main criticism of the book is that it treats only the 30,000 items currently held by NAI, saying very little about records held elswhere. It also works on the unspoken assumption that all of these records are currently available to the public, which is far from the case. The treatment of the collection online at genealogy.nationalarchives.ie, the only current access for the grubby-fingered public, is a little too austere and lofty: “Some documents are searchable online for free …[at] census.nationalarchives.ie/search/vob/home.jsp“.  Well, yes. Which ones?

If you’d like more, I’ll be speaking about the full Valuation Office archive (and channelling Frances McGee’s book) on Friday next at the Celtic Connections conference in Boston.