Dermot Balson is an Australian researcher with the same predilection as myself for juggling large Irish record-sets: the information underlying my 1901 and 1911 census maps came from him. He’s also passionate about spreading knowledge of Irish records as far and wide as possible. So this post is all about his collection. 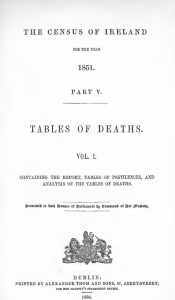 The University of Southampton’s ‘Enhanced Parliamentary Papers on Ireland’ at www.dippam.ac.uk/eppi (from a time when the UK parliament actually functioned)  has long been a difficult source to mine. Dermot has laboured long and come up with a whole bunch of hidden gems. The 1851 Census Report on deaths in Ireland ,  for example, includes nearly 300 pages of weather/illness/celestial phenomena dating back to the beginnings of Irish history, culled from a variety of sources, many now gone. See page 41 onward of this document. (Links are to Dermot’s cloud-stored copies.)

Workhouses and the Poor Law

His collection of enquiries, committee reports and publications on workhouses and the poor-law is superb, covering more than just the EPPI, and includes a series of inquiries and reports on the state of the poor, mainly in the 1820s and 1830s, but also an inquiry into congestion (aka poverty) in the early 1900s. The inquiries include thousands of pages of verbatim evidence from people on the ground in all parts of Ireland. In addition, he has the Reports of the Poor Law Commissioners, both English and Irish, starting from before the introduction of the poor law to Ireland. The 5th to the 13th English reports have an Irish section which details the introduction of workhouses to Ireland, after which the Irish reports take over. There is a huge amount of detail in these reports. They also include the progress of smallpox immunisation from 1840.

His Research and Statistics section   includes the Registrar General’s annual reports on births,  marriages and deaths  from the 1860s to 1920; a whole series of reports on the Famine, including fascinating correspondence with workhouses; a plethora of statistical and explanatory material, including such rarities as the 1852 US census report, which includes some interesting stats on Irish immigrants.

This section includes  dozens of official inquiries and reports, many detailing the conditions migrants faced from the 1820s on. He has also gathered together the advice being given to them before they left.

These are some 50 or so travellers’ accounts from different dates, always a great way to find out what was really happening. The classic “Ireland’s welcome to the stranger” is in here. Most books have indexes telling you where they went.

All in all, Dermot has assembled what is without doubt the best online library of sources for Irish history I’ve ever seen. Enjoy.