Seven years ago, when the fourth edition of Tracing Your Irish Ancestors came out, Claire Santry didn’t review it, she weighed it. I loved the gesture and I’ve always wanted to find a book for which I could do the same. Step forward William Roulston’s Researching Scots-Irish Ancestors (2nd edition 2018). 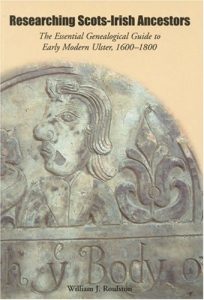 The first edition (a svelte ¾ lb, born in 2005) has long been essential for anyone trying to crack those toughest of Irish genealogical nuts, pre-1800 Ulster Presbyterians. They flooded across the Atlantic throughout the eighteenth century and peopled Pennsylvania and  Appalachia with astonishing fecundity. As a result, many, many Americans have Scots-Irish in their tree.

Before William’s first edition, when asked to research them, I would tend to stare at my shoes and mumble something about lack of records. With his book to hand, at least I could be clear about what I didn’t know. And now the second edition makes my ignorance pinpoint accurate, weighing in at a strapping 2 lb. 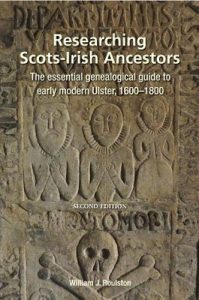 The format is very similar, with chapters on each topic carefully subdivided into numbered subsections, making navigation as easy and intuitive as possible. The familiar categories in the first edition – Church records, Gravestones, Seventeenth Century, Eighteenth Century, Estates, Deeds , Wills, Elections, Military and Newspapers  – are all retained and expanded to include material uncovered or accessioned since 2005. In addition, five new sections are added; Migration records; Education, Charity and  Hospital Records; Business and Occupational records; Organisations and Societies; Diaries and Memoirs.

As in the first edition, the appendices make up more than half the book, almost 350 pages out of a total of 600. And, as before, they are what make the book absolutely essential: the hundred-page county-by-county listing  of Ulster estates and their records is worth the price of the book on its own. This is not a how-to, it’s an extraordinary encyclopaedia of historical Ulster, and a wonderful achievement.

There are a few tiny bones to pick. First, I’d love to see William’s take on nineteenth-century records. The cut-off at 1800 seems a bit limiting. 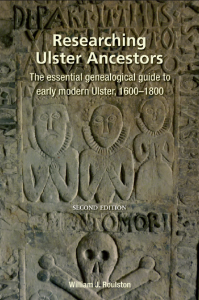 Second, the book, very strangely, has two titles, called Researching Ulster Ancestors  in the UK and Researching Scots-Irish Ancestors elsewhere. Why? Though Ulster Scots are inevitable the prime focus, the records covered are blind to tribal affiliation.

And third, the book was published just after my own fifth edition went to the publisher, so I couldn’t plunder all the new material. Curses, foiled again.

At the recent Back to Our Past I ran into two American friends who bring over research groups every year, dividing the trip between Belfast and Dublin. This year both of them were agog at what seems to be about to happen to the UK. They wondered if they’d be visiting the smoking, post-Brexit ruins of Belfast’s Titanic Quarter next year.

One large reason for what’s shaping up to be a historic catastrophe is England’s deeply dysfunctional relationship with English history. Many of them believe they won both World Wars single-handed and only lost their Empire because of the natives’ ingratitude. Once out of the EU, they plan to go back to an imaginary past.

But Ireland is going to take a huge amount of collateral damage and English ignorance of Irish history is a large reason why. Take Northern Ireland. 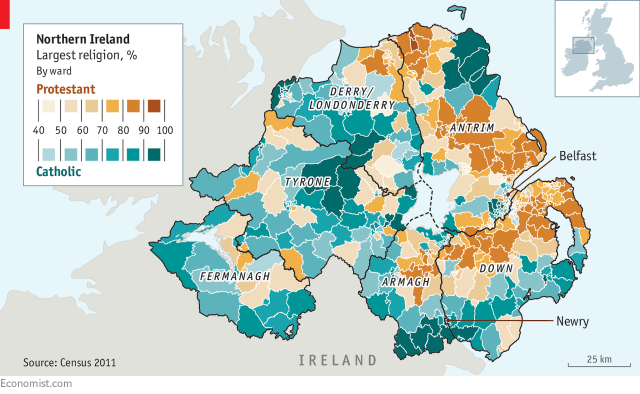 As the map shows, history has left the two tribes intermingled and separate, cheek by jowl and apart, in virtually every part of the province. Only the agreement in 1998 that territory would no longer be contested made it possible to put our low-level civil war (a.k.a “the Troubles”) into suspended animation. Brexit (‘take back control of our borders’) is all about territory. Even with the best possible outcome, borders will return, and not just between Northern Ireland and the Republic. All those little islands of green and orange will have their own miniature borders, with Irish-passport-holding EU citizens on one side and British citizens on the other. If ever there was a recipe for deepening and re-igniting communal conflict, this is it.

Ireland, north or south, did not figure at all in the fantasies peddled during the UK referendum. By the sound of it, a large number of senior Tory party grandees have still not fully accepted that Ireland is a separate country. We’re a post-imperial rounding error. And it’s on these people’s grasp of our history that Ireland’s future, north and south, depends.

Roman Catholic parish registers constitute by far the most important set of records for nineteenth-century Irish local and family history. And, in the furore over access, one vital point is constantly missed. The original records are still sitting in the sacristies and presbyteries around the country where they have been for the past two centuries. No organization on the island is concerned with preserving them: there is no archival programme to ensure their survival.

Why should this matter? Aren’t they’re all copied online anyway? Or in the National Library microfilm collection?

Here are some facts about the collections of copies. The National Library microfilm project, heroic as it was, has serious flaws, apart from the cut-off of 1880. A few parishes were missed entirely – Rathlin Island, for example – and some films are so out of focus as to be illegible, the main reason for the flaws in the transcripts done by Ancestry and FindMyPast.

Comparing the years covered by the heritage centres’ transcriptions with the years held on Library microfilm also reveals that dozens of parishes have records earlier than those filmed by the Library: Aghada in east Cork, for example, has marriage records going back 40 years before the NLI microfilm. Roscommon and Sligo towns both have full early baptismal registers going back decades before the NLI copies.  And for Carrick-on-Shannon, NLI appears to have missed nearly all the records of one of the two chapels in the parish, Kiltoghart-Murhane, meaning only half the Catholic records are on microfilm.

The mismatch also works in the other direction. More than 100 parishes (many in Wexford) have earlier years on microfilm than in heritage centre transcript. Adamstown, Aghaderg, Ahoghill, Ballinascreen, Cappoquin … all have microfilm records earlier than the rootsireland transcripts. Were these earlier registers somehow lost or destroyed between the NLI microfilm in the 1970s and the transcription project in the 1990s? How many other registers have also since disappeared?

No copy can take the place of the original. The registers themselves are the property of the Catholic Church, and also the Church’s responsibility. If the Hierarchy wants to keep them private, by all means let them be locked away in acid-free boxes in diocesan archives for a century or more. But something has to be done to stop them from rotting away.

The country in whose records we do most of our research was the United Kingdom of Great Britain and Ireland. It broke apart a century ago, and the two leftover bits may have cultivated wilful blindness towards each other since, but that can’t change the fact that the Irish Sea was effectively an inland lake, providing cheap and easy transport between the two islands. It was simpler and more comfortable to travel from Dublin to Liverpool than to Kilkenny.

What brings this to mind is a recent training trip to Glasgow, organised by my professional association, Accredited Genealogists Ireland.

The city itself is wonderful. I’m happy to report that the traditional Glasgow salutation is not, as I had believed, the headbutt (pace Rab C. Nesbitt). But the accent should be a Unesco World Heritage Artifact, with its swallowed consonants and vowels stretched over three syllables, all packed into in a singing lilt that hits stresses in exactly the wrong places. The quintessentially English “Keep calm and carry on” translates into Glaswegian as “Keep calm and ge’ oan wae i'”.

The highlight of the visit was the Mitchell Library and in particular a talk (in unsubtitled Glaswegian) on Glasgow Poor Law records by Senior Archivist, Irene O’Brien. The first and most important point she made was that, despite the name, there was almost no similarity with the Irish or English Poor Law. What Glasgow had from 1845 was more akin to an all-encompassing welfare state than the begrudged misery doled out in Irish workhouses. A vast bureaucracy collected huge quantities of information on the families of applicants, who could be widows, unemployed, sick, orphans … And they’re all in the Mitchell.

For most of the nineteenth century, the gravitational pull of the city’s gigantic industrial employers drew in thousands upon thousands of migrants, from Russia, India, Poland, Italy and above all rural Ireland, rural Ulster especially. So these Poor Law Applications hold information on Irish families from well before the start of Irish civil registration or church registers. And not just names, also locations, in-laws, work histories, even little character assassinations: “an awful boozer”.

Accessing them in the Mitchell is simplicity itself. The entire fifth floor is given over to archives and family history, a database name-index pinpoints the original files, the record delivery is fast and efficient.

But … the only point of access is physically in Glasgow. There is no way to check online before visiting whether the files reference a particular family (though any family with connections in the city will almost certainly appear, even if only through a tangential branch).

I think this might have to do with the fact for Glaswegians, the city is the centre of the universe, a universe that looks very like Glasgow. It’s understandable, but a mistake. Having even the names index online would draw in many more researchers.