When people complain to me about transcription errors in our shiny new databases, I try to reassure them: “Notch your scepticism up to 11, come at the records from as many angles as possible and always remember that these errors are the price you pay for having the databases in the first place.”

Going through the National Archives online Tithe Books collection over the past week, I repeated that advice to myself over and over, but it didn’t work. I just don’t want to pay that price any more.

As a source, the Books’ main virtue is that they exist. If we had the censuses destroyed in 1922, they’d be a quirky footnote, a textbook example of blinkered Irish sectarianism shooting itself in the foot. Supporting your clergy by imposing a tax on near-destitute members of a rival church was hardly a recipe for inter-faith harmony.

But they are now virtually the only census substitutes for most places in the 1820s and 1830s, and the NAI online collection is the only route of access. And it’s god-awful.

First, the quality of the personal name and place name transcriptions is only wojus. In a single parish, Knock in Mayo, I’ve counted at least ten mistakes for the surname Flatley: Flattey, Hattley, Halley, Hattely, Hatley, Huttley, Slatterly, Slattery, Thally, and Harley.

OK, but at least we can use the online images as if we were at a microfilm reader and just ignore the database?

No. The parish names are jumbled up so badly, it’s impossible to be sure what images you’re looking at. To take Carlow alone, the link for Aghade takes you to Aghada (Kerry), Clonmelsh to Clonmult (Cork), Lorum to Loughbraccan (Meath), Painestown (Carlow) to Painstown (Meath) … And the online correction facility provides no way of pointing out gross navigational problems like these.

Then last week, while wandering idly through the FamilySearch online catalogue, I came across the listing for the original microfilm collection on which the NAI site is based.  The layout makes it clear that the originals were organised into 140 bundles alphabetised by parish name. So bundle #1 ran from Abbey to Aghaboy and bundle #140 from Wallstown to Youghalarra. (and incidentally bundle #45 Drung to Duncormick was never microfilmed at all and so is just not digitised).

All the mistaken parish identifications are there on FamilySearch too, but seeing the original microfilms laid out like this makes it possible to burrow down to the actual start point of each tithe book. I’ve done it for Carlow (here), but with the results linked to FamilySearch rather than NAI. For one thing, the FamilySearch online microfilm reader has previous/next links, praised be the Saints. For another, where there are database transcripts, they appear below the images, providing (limited) help in deciphering.

There’s a lot more work to be done to make the other 25 counties actually useable. I don’t think anyone else is going to do it.

They’re not. All the other records in the world are weird. Irish records are the only normal ones.

‘Did you see my little Jimmy marching
With the soldiers up the avenue? 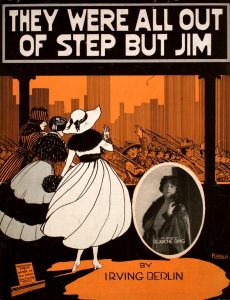 There was Jimmy just as stiff as starch
Just like his father on the seventeenth of March.
Did you notice all the lovely ladies
Casting their eyes on him?
Away he went to live in a tent
Over in France with his regiment.
Were you there, and tell me, did you notice?
They were all out of step but Jim’

OK, maybe a little weird, but with good reason.

In April 1922, in the series of events that began the short but vicious Irish Civil War, a group of Republican guerrilla fighters took over The Four Courts, the complex of buildings in the centre of Dublin that coincidentally housed the Public Record Office of Ireland.  They used the most solid structure in the complex to house their large hoard of munitions. This was the Treasury store-room of the PRO.

When the phoney war ended on June 29th 1922, their opponents began to shell The Four Courts and on the morning of June 30th, a series of enormous explosions took place. The munitions dump inside the Treasury had detonated. As a result every single document in the Treasury was destroyed. 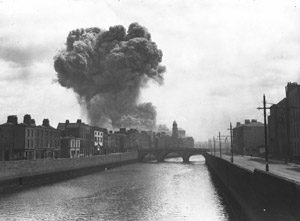 Before June 30th 1922, Ireland had one of the richest sets of historical documents on the planet. What happened on that day is the reason so much Irish research on periods before the 1850s is now focussed on bizarre, otherwise unimportant sources: tithe books, rent rolls, sectarian head-counts …

But what wasn’t in the Treasury is still there: fragments on their way back from the Reading Room or out for rebinding, finding aids, published copies … And of course many records were never in the PRO in the first place – other church records, civil registration records, local tax records, the 1901 and 1911 censuses and much more.

If you’re researching German ancestors, you have to deal with records written in the German language. If you’re researching Russians, you’ll come up against Russian. If you have Irish, you’ll be looking at records apparently in English, but distorted by the huge background presence of a completely different language, Gaelic.

Well into the nineteenth century – especially in the poorest areas of the West and North from which there was most migration –  the Irish language, Gaelic, was the language of everyday life. So when a baptism or marriage or burial was recorded, most of the people being recorded supplied their names in Gaelic. But no written records of these events were ever kept in Gaelic. So the record-keeper somehow had to import those Gaelic surnames into English.

The result was an extraordinary range of variation, with names mangled and distorted out of all recognition. First the venerable Gaelic prefixes Ó and Mac (meaning “grandson of” and “son of”) were treated as nuisances to be got rid of. Then the English-speaking record-keeper wrote down what he heard. Or what he thought he heard. Or what he thought the meaning of the surname was. Or a completely different English surname that just sounded a bit similar.

So Ó Maoildeirg (meaning “grandson of the red monk”) became Mulderrig. But it also became Reddington: I’ve seen members of the same family baptised as both. Mac Giolla Bhríde (“son of the follower of St. Bridget”) became Bride and McBride and Gilbride and Kilbride. Mac an Bhreithiún (“son of the judge”) is in the records as Breheny and Brehon and Judge and Abraham. Ó hIongardáil became the stout, bully-beef English surname Harrington.

In sum, one of the biggest obstacles to successful research in Irish records is the lack of appreciation of the extraordinary variation in the written records of Irish surnames. They are unimaginably slippery.

There are so many of you and so few of us

The relationship between Ireland and the descendants of those who left Ireland is unique. There are over ten times more people claiming Irish descent in the US alone than there are in the Old Country itself.

For a long time, this was a source of shame in Ireland – what kind of a country forces so many of its people to leave? Genealogy, for the Irish overwhelmingly a process of re-knitting family connections broken by emigration, was bizarre and unrespectable.

“We spent a long time sweeping all that under the carpet, don’t be bringing it out now”.

In the 1990s, that began to change. For whatever reason, we began to come to terms with Ireland’s history and official attitudes to what was now our “disapora” began to shift. The Irish nation became looser and baggier, to include Irish-America, Irish-Australia, Irish-Canada. (Irish-Britain is still a bit of a stretch, but we’re getting there.)

One practical result was that official assistance for people researching their Irish ancestry mushroomed. It became government policy to make as many records as possible freely available online. The extraordinary success of the digitised 1901 and 1911 censuses showed what could be done. Since then Griffith’s went free, the Catholic register microfilms went free, and, most extraordinary of all, last September almost all of the state records of births, marriages and deaths went free.

The effect has been that it is now straighforward to take any Irish family back to the mid-nineteenth century, a revolutionary change completely unforeseeable even two or three years ago. And Irish research is the least commercialised of any English-speaking country.

So yes, weird, but mostly in a good way.

Like everyone else in Ireland, I’ve been aghast at the revelations of the treatment of the bodies of babies and infants who died in the Tuam Mother and Baby Home between the 1920s and the 1960s. Once again, we’re reminded how little value independent Ireland placed on its own children, with particular loathing and cruelty reserved for the children of the poorest and most vulnerable.

And it is Ireland that bears responsibility, not just the Catholic Church. The men and women who ran these institutions were our parents, grandparents, aunts and uncles, not alien occupiers dispatched from the Vatican, as some recent anti-Catholic commentary seems to imply.  I remember my father jokingly threatening me with Salthill Industrial School for some misdemeanour in the early 1960s. He knew, and I knew, that there was horror behind its doors.

Bystanders most of us may have been, but innocent? No.

As a researcher, the aspect of the Tuam story that struck me most strongly was how local historian Catherine Corless went about retrieving the memory of the children who died in the Home. She examined all the local death records in order to identify the deaths of those who had died in the Home and then bought individual General Register Office print-outs at €4 each.

And of course all of these records are now free online and easily searchable up to 1964. And there are many other Mother and Baby Homes whose infant deaths have not been retrieved, where the memory of those children is still obscured.

So it’s now possible and simple to extend what Catherine did to those other children. This is a list of the fourteen homes being investigated by the Mother and Baby Homes Commission.

Pick a home, go to the Advanced Search section of the IrishGenealogy civil records site and confine the search to that home’s Registration District, with the age at death 0, 1 or 2 . Then just work your way, year by year, through the death records, as Catherine did. It quickly becomes clear just how appalling the child death rates were in those institutions.

Where are they all buried? Almost none in marked graves, that’s for sure. At least the act of retrieving their names might begin the process of ensuring they are not completely forgotten.

Almost all the genealogy writing and coding I do is the product of advanced laziness. Tracing Your Irish Ancestors came about because I needed handy pigeonholes for all those source references I couldn’t be bothered to remember. The databases and websites arose out frustration at having to repeatedly check the same reference works in the same order – find a townland, identify the civil parish, work out the Catholic parish, check the diocese, check the dates, order the microfilm. Argh. Shortcuts, give me shortcuts!

So most of this website is the result of me building tools to make research easier for myself.

All of this is a roundabout way of saying that after ten months, I’ve finally got around to having a proper “What’s new?” page, with dated details of all the record references and new features I add, as I add them, and a proper “email me when you add something” service.

My light is no longer under a bushel.