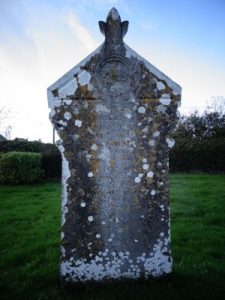 A recent research project took me to a headstone in Terryglass in north Tipperary (historicgraves.com). It was erected by a Daniel Hogan in memory of his father John, who died in 1856, and it included mothers’ maiden name, siblings, ages at death – wonderful stuff that took the family well back into the 18th century.

My focus was also Daniel Hogan, listed as occupying 40 acres in the townland of Cappanasmear in Terryglass in Griffith’s Valuation, published for this area in 1852. Could they be the same person?

Circumstantial evidence is all that survives. So first, I needed to check how many households in Terryglass were headed by a Daniel Hogan between 1827 and 1857. The baptismal registers (rootsireland.ie) show no fewer than 12 separate Hogan families headed by a Daniel. Not good news. But the Cappanasmear Hogans seem to have been the most prosperous, so there was still hope.

The Griffith’s manuscript notebooks for Terryglass from 1845 were next. Daniel was there, but the difference with the published record showed the effect of the Famine on the townland. In the seven years to 1852, three of his neighbours’ holdings had vanished.

Because the Valuation was a tax record, it had to be updated regularly.

The first revision in the Valuation Office, dated 1857, showed the ongoing catastrophic impact of the Famine. Of 21 houses listed in Cappanasmear in 1845, by 1857 only 11 remain. And Daniel is gone, his house demolished, his land absorbed into neighbours’ holdings. This doesn’t look like someone who was erecting a carefully-carved gravestone commemorating a death that took place in 1856.

Where did the family go between 1852 and 1857? An 1855 state census shows four of them in upstate New York. And Daniel’s wife, Ann, records that she arrived in the US two years previously and has been a widow for a year. So my Daniel could not have been in Terryglass in 1856 and could not have put up that wonderful headstone.

Negative outcomes can be just as important as positive ones. But I still cling to the hope that something will disprove my disproof.