My contract with the National Archives to clear the backlog of census corrections emails has come to an end. After eighteen months of grinding through 250 emails a day, it’s a bit of a relief. Yes, I managed to suck the 102,000 outstanding emails into a database that allowed easy comparison between the  original image and the suggested corrections, and yes that also meant it was possible to identify many duplicate suggestions.

But the low-hanging fruit were all picked a long time ago. Over the past months most of the corrections seem to be along the lines of “My granny was 17, not 16. And her surname was Browne, not Brown.”

The 90,000 emails (88% of the total) contained almost a quarter of a million suggestions, 95,000 correct, 80,000 duplicate and 40,000 inaccurate. I can guarantee there will be no official enquiry into cost overruns or ballooning budgets.

Exposure to the censuses at this scale gives insights into some of their peculiarities. A surprising number of people in 1901 and 1911 were hazy about precise family relationships. Grandparents repeatedly list their grandchildren as nephews or nieces. Why? In Italian nipote actually means both “grandchild” and “niece or nephew”, so perhaps something deep in our mental family structure equates the two-step distance of sibling’s-child and child’s-child. Or maybe it was just doddery grandparents. In any case, their descendants wanted it corrected. And of course it couldn’t be, because whatever was recorded on the form has to appear in the transcript.

The transcribers enforced this fanatically when it came to religion, for some reason. Not surprisingly, many people wanted “Roaming Chatilic”, “Presbitrian” and “Babtist” corrected, but if that’s what was written … On the other hand, there were many stinkers in Ireland a century ago, but none recorded “Free Stinker” as their religion.

The most poignant were emails where people expanded on the information supplied, correcting “Scholar” to “My grandmother”, expanding initials or later lives or even, in one case, washing the family dirty linen a century later:
Transcribed: John Murphy son 10
Correction: ILLIGITIMATE NO RELATION

I also came across unexpected individuals. The real Thady Quill, not rambling, nor roving, nor footballing, nor courting, just a simple farm labourer.

But the League lives on!

One aspect of the myth of St. Patrick that I’ve always found peculiar is his early kidnapping and enslavement. Not the fact of it – Patrick’s Confessio is absolutely authentic, the fifth-century Irish enjoyed rich pickings in the decayed remnants of Roman Britain, and slavery was deeply embedded in Gaelic Irish culture. In Brehon law, a female slave (cumal) could be used as a unit of value in financial transactions. It took quite a few cumail to buy a horse, apparently.

No, what’s odd is the conflict between the general acceptance that Patrick was a Romanised Welshman and the place where he ended up herding sheep. Mount Slemish is between Ballymena and Larne, way up in the north-east and a long, long way from Wales.  So a fairly unnatural place for a low-value boy-slave to end up.

Norman Davies’ wonderfully batty Vanished Kingdoms, (Allen Lane, 2011), suggests an explanation. The book aims to draw attention to European states that have disappeared virtually without trace, such places as Burgundia, the Visigothic kingdom in Spain known as Tolosa and (weirdly) “Éire”. For St. Patrick, the most interesting is the kingdom of Alt Clud, “The Rock”, centred at Dumbarton just outside Glasgow and taking in most of what are now Kilbride, Kilmarnock and northern Galloway. 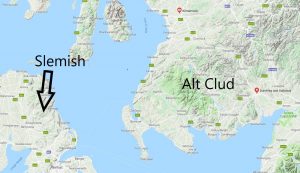 In Davies’ account, the kingdom lasted from roughly the fourth century to roughly the ninth, and was North British in the original cultural sense, with its people speaking Cumbric, a p-Celtic language closely related to Welsh, Cornish and Breton. Part of the evidence is the only surviving authentic writing of Patrick’s apart from the Confessio. His Letter to Coroticus is a severe dressing-down aimed at a ruler identified by Davies as Ceredig Gueldig, the earliest king of The Rock. Who better for a bishop to wag his finger at than his own leader?

Interpreting records from the period is notoriously problematic, akin to picking one’s way through a vast swamp using a few tiny, unstable stepping stones, but Davies’ performance is as nimble as a mountain goat. He makes it hard to resist the picture of the young Patrick on Slemish looking out across the narrowest stretch of water on the Irish Sea to his home in Alt Clud.

By the late 1980s, the Irish Genealogical Project was just getting into full swing. It was funded by piggy-backing on local voluntary groups, state retraining schemes, Bórd Fáilte, the cross-border Ireland Fund and a bit of whatever you’re having yourself. The aim was to transcribe and computerise all the major genealogical record sources and then use them to boost tourism in some unspecified way. Behind it stood the then Taoiseach, the thankfully unique Charles J. Haughey. 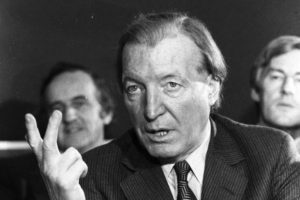 The vehicle was to be the network of local heritage centres that became the Irish Family History Foundation, the organisation behind the present Rootsireland.

The IGP behaved initially as if professional genealogy did not exist, which, unsurprisingly, got right up the noses of professional genealogists. Surprisingly, however, we proved adept at political lobbying. As a result, in 1990 we were offered an official role in the Project. As part of this, out of the three project managers to be employed one would come from our ranks. In addition there would be state funding for research projects to be proposed by individual genealogists. My colleagues in APGI very generously (I think) put me up for the job.

It was a weird position to be in. When I started I had no office, no functions, no job description and was seen by many in the IFHF as a fifth columnist, one of the enemy. Eventually, I acquired a desk in a corner of Fergus 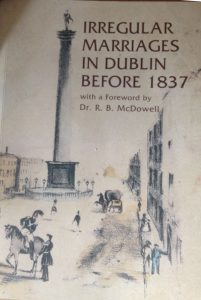 Gillespie’s office in the Genealogical Office and a job doling out funding to my genealogist colleagues. The money, believe it or not, came from the Soldiers’ and Sailors’ Fund, originally intended to house Irish ex-servicemen after World War 1. Yes, yes, I know I was complicit in oiling the squeaky wheel.  Some good did come of it, though. Harry McDowell’s excellent Irregular Marriages in Dublin before 1837 (Dundalk, 2015) is just one of the tangible offspring.

A lot of the day-to-day work of a professional genealogist then consisted of repeated consultation of the same reference works in the same order – find a townland, identify the civil parish, work out the Catholic parish, check the diocese, check the dates, order the microfilm. My first meeting with a database, Microsoft Works 2, took place in Fergus’ office on an IGP computer. It was a light-bulb moment. Everything could be put together just once and would then be permanently available at the click of a button.

Putting everything together just once was the tallest of tall orders, but this was a possible escape from the IGP. So I began to tunnel out. All my spare time went into stitching together the Townlands Index with the National Library parish register listings and gravestone listings and census substitutes and estate records … 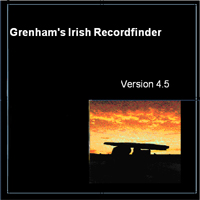 In 1995, bleary-eyed and bone-weary of the IGP’s interminable committee meetings, I quit. The plan was to sell a fully-fledged stand-alone expert system, “Grenham’s Irish Recordfinder”, capable of taking whatever a user knew about an Irish ancestor and producing a formatted report detailing all the relevant sources, with advice, reference numbers, and locations. It was based on Microsoft Access 2 runtime and came on no fewer than 21 floppy disks.

I’m no salesman. Happily, Paddy Waldron introduced me to the recently-started Irish Times website. They bought 50% of the online rights in December 1995 and my children could eat again.

It took until 1998 for the online version to go live, but from then until 2016 the site provided the basis of my livelihood. Its development also gave me the opportunity to fill in some of the vast gaps in my programming and database knowledge, solving knotty problems with the time-honoured practice of repeatedly banging my head off the monitor.

When the Times ended our collaboration, they very generously let me have the online rights back. I did fourteen years programming in six frantic months to bring you the current incarnation of the site.

And that, ladies and gentlemen, is how I got into this mess.