Irish research doesn’t have many under-explored collections, so you’d expect joy unconfined to surround the records of the Valuation Office. However, most researchers’ eyes glaze over when you mention them.  And for good reason. The Office is one of the oldest continuously functioning arms of public administration in Ireland, set up in 1826 and still operating today. That’s almost two centuries, long enough to produce entire Himalayas of paper, which include some of the gnarliest records imaginable.

The Office’s basic role was (and is) simple enough: to create property valuations on which local property taxes could be based. Its main achievement was Griffith’s Primary Valuation of 1847-1864. But the creation of Griffith’s was far from simple.

The initial Townland Valuation Act (1826) allowed for a complete assessment of the annual value of every parcel of land and building in Ireland, with the aim of producing a total for each townland that could be used as the basis of a yearly tax. But in 1826 nobody even knew what townlands were where, so the project became dependant on, and intertwined with, the Boundary Commission and the Ordnance Survey.

The earliest OS maps were produced for Londonderry in 1831 and it was then and there that surveying began.  Richard Griffith, the Valuation Commissioner, quickly saw that the plan to value everything was far too ambitious for the resources available. While continuing to value all land, a  threshold of £3 annual value was adopted for buildings to be assessed, excluding the large majority of householders but still covering a significant number of dwellings and commercial premises, especially in towns. The valuation continued on this basis for the next seven years, covering eight of the northern counties. By 1836, however, it was clear that even with a £3 threshold the surveying would never be completed. In that year the threshold was raised to £5, covering only the most substantial buildings.

The year 1838 saw the introduction of the Irish Poor Law, a rudimentary system of relief for the most destitute, and its funding was  based on a separate property survey. It quickly became obvious that it made no sense to have two separate systems of local taxation, based on differing valuations of the same property. In 1844, with townland valuations complete for 27 of the 32 counties, Griffith was authorised to change the basis of assessment by dropping the £5 threshold and covering all property in the remaining counties, all of them in Munster.

The Tenement Valuation Act (1852) retrospectively allowed Griffith to extend the system throughout Ireland – a procedure he had in fact already begun. Over two decades of valuation he had assembled a veritable army of skilled employees, each with a precise role in his vast valuing mechanism. It allowed him to publish county-by-county surveys of the entire island between 1847 and 1864, generally with the southern counties earlier and the northern counties later.

In the course of this long-drawn-out saga, huge quantities of manuscript records were produced. Firstly, the pre-1836 valuation of the northern counties, based on the £3 building threshold, created local valuers’ “house books” and “field books”, the former including the names of occupiers, the latter in theory at least concerned purely with soil productivity. They remain particularly useful for urban or semi-urban areas in northern counties before 1838.

After the change in the basis of assessment in 1844, the main categories of valuers’ notebooks continued to be known as ‘house books’ and ‘field books’, but the distinction became more than a little blurred, with information on occupiers appearing in both. To add to the merriment, other classes of notebook were also created:

There are far fewer of these than of the ‘house’ and ‘field’ books.

The survival of pre-publication Valuation Office records is patchy, with some parishes having four or more books while others have none at all. The only way to find out what’s there is to examine the records themselves. There are two major collections, one in PRONI, the other in NAI. The PRONI records cover only the six countues of Northern Ireland and are only available onsite in Belfast. It’s not clear from the information they provide that any of the post-1844 books are publicly available. In 2003, the LDS microfilmed the entire collection then held by NAI and this is the collection now online at genealogy.nationalarchives.ie.

Another set of records, held by the Valuation Office itself until 2003 and subsequently moved to NAI, is still being catalogued and conserved and so is not as yet publicly available. The word is that it includes thousands upon thousands of valuers’ hand-made maps, with the tantalizing prospect of detailed field and townland maps that will hold a magnifying glass to rural Ireland of the 1830s and 1840s.

NAI has done a wonderful job of making the earlier microfilmed records intelligible and accessible. Written by former director Frances Magee, the introductory text for each of the manuscript types is a master-class in the valuation process and the codes used by the valuers. She has a book on the Valuation Office collection in the works, due out some time in the next twelve months. Roll on the day.

One caveat about the database transcripts. Something funny seems to be happening on the NAI site. Compare the search results for a Martin Heavy on FindMyPast with the results on the NAI site. There should be no difference – they’re the same underlying datasets. For the moment, the FindMyPast search is the one I trust. It’s free and also permits browsing by parish, something not available on the NAI site.

These records might seem marginal and messy compared with the published Valuation, but keep in mind that Griffith’s, far from being the record of a settled population, is a snapshot of the aftermath of a catastrophe, the Great Famine. In many areas enormous changes took place  between the original survey and final publication.  In the area around Skibbereen, for example. the pre-publication records are be the only surviving evidence of entire villages that were wiped out.

Last week, RTÉ TV news ran a piece of techno-utopianism that really got my attention. A group based in Trinity College are going to create a digital 3-D model of the old Public Record Office that was destroyed in 1922.

Fair enough. The centenary of that ignominious act is approaching and it certainly needs remembering.

Then the report went on to say that the group was also going to digitally reconstruct the records that had been destroyed, thus retrieving seven lost centuries of history and genealogy. Say again? They’re going to magic back into existence the ten million or so returns from the lost censuses of 1821, 1831, 1841 and 1851? How? By closing their eyes and clicking their heels together three times?

The group’s website tells a more nuanced story. Yes, there will indeed be a shiny, walk-through digital model, but the approach to reconstructing records is modest enough.  It centres on using Herbert Wood’s A Guide to the Records Deposited in the Public Record Office of Ireland (Dublin, 1919) to identify substitutes for what was destroyed, much as  the National Archives of Ireland has been doing since 1922 with, for example, its testamentary record substitutes. The difference is that copies of, or links to, the substitute material will be organised within the virtual model, thus recreating (kind of) the experience of using the old PRO.

It’s a good idea. Any opportunity to digitise and publicise surviving fragments and substitutes is very welcome. And it should also shine a light into a few areas that don’t get enough attention – the seven volumes of thirteenth to sixteenth-century excerpts from plea rolls, patent rolls and pipe rolls in the National Library Genealogical Office collection (GO 189-95), for one.

But I think that the end result is likely to be more dystopian than utopian. At last we’ll get to see, perfectly-rendered, the size and shape of the black hole at the heart of Irish history and genealogy.

The project site has a news page that links to all the attention they got last week. It wasn’t just RTE, nearly every other news outlet got the story wrong and reported the imminent return out of digital thin air of all the lost records. The team need to be a bit more careful about how they attract attention to what they’re doing.  Some of those news reports look distinctly fake.

Irish whinging about the weather can get on your nerves. But my God the 2017-18  winter deserves all the whinging it gets. It’s toying with us, pretending to stop just long enough to get us to put away our thermal long johns, then whipping back into vicious life. Here’s how I comfort myself as I stand at a Dublin bus-stop with every piece of exposed flesh flayed by horizontal sleet.

First I remember how things were just a short generation ago, when central heating was a novelty in Ireland. For the four months of winter, life shrank down to the semi-circle around the fire. Many’s the seat of a pair of trousers I singed painfully in the quest for a biteen of heat. Ochón

Then I think back further. Imagine life in the Viking town around Wood Quay in Dublin, where the only heat would come from a fire without a chimney in the centre of a mud-and-wattle hut. Then just think what persistent Irish February rain could do to a mud-and-wattle hut.

“What didn’t kill them made them  stronger”? I’m sure Irish Februarys killed more Vikings than Brian Ború. So I feel thankful (and  hope that bloody bus comes soon).

My real heroes at this time of the year, though, are Irish Met Office forecasters.  Your heart has to go out to them. They have the most thankless task you could imagine, so they keep trying to soften the message:

“Scattered showers of locusts spreading from the West in the morning, turning to fiery hail by the afternoon and becoming persistent overnight. But it’ll be mostly dry on Friday!”

The current issue of The New Yorker has a lovely article about Jennifer Mendelsohn, an American genealogist who has taken to researching the immigrant ancestors of US politicians and pundits who make anti-immigration pronouncements. Time after time, she’s come up with ancestors who personify the supposed failings being denounced. I especially like her response to Fox News commentator Tomi Lahren who finger-wagged: “Respect our laws and we welcome you. If not, bye”. Tomi’s great-great-grandfather was indicted for forging citizenship papers.

America is obviously ripe for this kind of thing – as she says herself, “Unless you’re Native American or you descend from slaves who were brought here against their will, you are an immigrant in this country, or you’re a descendant of an immigrant in this country.” On the other hand, I doubt what she’s doing will have much effect. Respect for the truth is not a conspicuous characteristic of those she’s challenging. I’m sure the massed ranks of Fox News commentators are laughing at her naivety as they tuck in to their breakfast of broiled baby immigrant.

Is there any equivalent in Ireland? The only example I can thing of is Catherine Corless wading through Tuam death records to bring to light the evidence of  Mother and Baby Home abuses.  I’d be very interested in suggestions.

Then, of course, there’s the Irish contribution to the current state of the US. Or, as an article on the History News Network has it, “ Why are all the conservative loudmouths Irish-American?” 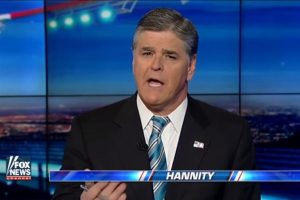