As anyone who has used my website knows, a lot of it depends on maps that visualise the historic locations of households and records in particular areas of Ireland. Users can then (mostly) click through to the actual records.

The original inspiration came from a book by Edward Kneafsey, Surnames of Ireland (2002, the author), which took the 200 most numerous surnames on the island and created an individual ‘dot-density’ maps for each, based on a count of surnames by phone-code areas.

The results were striking, with clear visual connections between population density and traditional home areas. So I said to myself “Wouldn’t it be interesting to do the same online for the 20,000 or so surnames recorded between 1847 and 1864 in Griffith’s?”

It took months of weeping, wailing, teeth-gnashing and keyboard-headbutting to figure it out, but eventually I managed to use Google’s Geocharting javascript to do it. I was as pleased as punch when it all went live on the old Irish Times ‘Irish Ancestors’ site in 2012. It’s still at the heart of the main surname search page on this site. 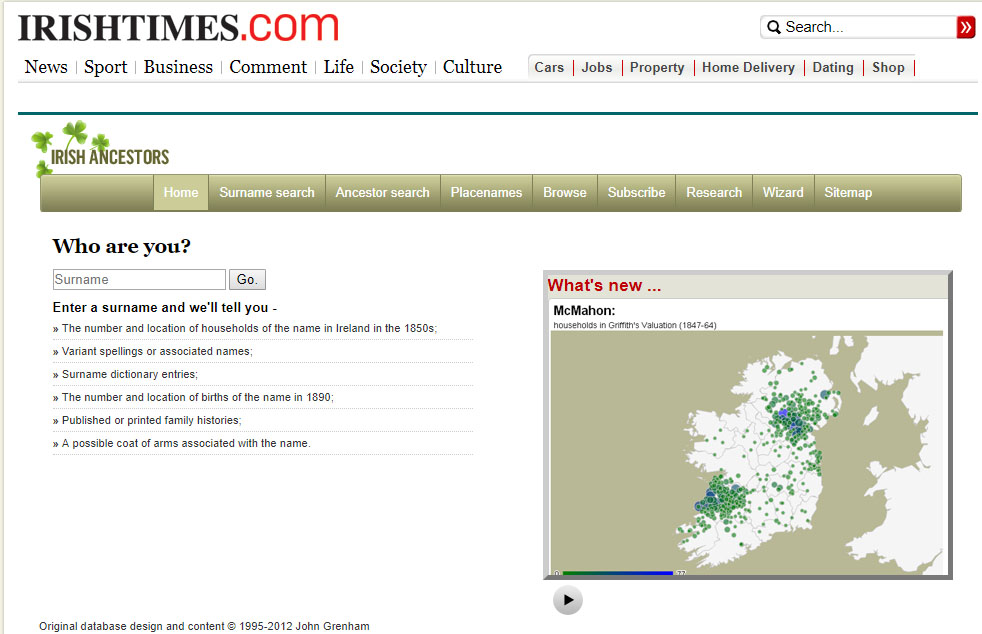 There are limits to how interactive geocharting can be – it’s not possible to create links in the markers, for example – so I then started to investigate the main Google Maps javascript, where there is much more flexibility. Cue another two years of weeping, waling, gnashing … In 2015, I worked out how to map the birth indexes then appearing on IrishGenealogy.ie onto Google Maps locations of registration districts and include on the map marker a link back to the records on IrishGenealogy. And then came the 1911 census. And the 1901. And the FindMyPast Catholic baptism transcripts …

All of this depended entirely on the enlightened self-interest of Google’s pricing of access to their maps. There  was a generous free allowance of 750,000 monthly map hits, way beyond what I would ever need. Even above that limit, the prices were painless.

Then last July, with a month’s notice, the monthly allowance shrank to 28,000, a drop of 96%. And the price for usage above the limit increased by more than 1,400%. Some MBA in Palo Alto, red in tooth and claw, had evidently decided there were enough fish in the barrel and it was time to start shooting.  The usual Google trade-off of information to sell advertsing in return for a free service was no longer enough.

This is the baseball bat business model: “Nice maps you got here. Shame if anything happened them. Capeesh?”

Faced with the prospect of having to pay thousands a year for a previously free service, I’ve moved most of the maps to the open-source-based MapBox. There will still be payment, but at least not to Google.

For me this is a nuisance. For developers in parts of the world where Google has a monopoly of map data, it’s a business-destroyer, with a single flat US$ price regardless of circumstances or local going rates.

It has been a revelation. Don’t be evil.

The new Irish series of Who Do You Think You Are? kicked off last week and once again,  despite myself,  I enjoyed it immensely. The franchised format is restrictive and repetitive – a celebrity finds out their ancestry at the same time as the viewer, travels to distant record offices, discovers contrasting family branches and solves knotty research problems by looking in a big book in a picturesque church.

But RTE (and their production company Animo) have grasped very well that the  genealogy is only a pretext for telling stories and they can make those stories resonate with their audience, humanising history by making it family history. Also getting a celeb to blub onscreen is good.

I was especially riveted by the first show in the series, which dealt with singer Damien Dempsey, not just because the stories were excellent, but because I had been doing research for him for the past three years. So my jaw hit the floor as what appeared to be my research emerged from the mouths of a variety of historians and genealogists. I paused the list of credits to see if I had a mention, but nothing. Wtf? says I to myself.

So I emailed the friend responsible for organising the show’s research and asked her “Wtf?” She had never heard of my research. So nobody stole my work.  She had had to duplicate it because she didn’t know it existed. I then emailed the bould Damien and asked him “Wtf?” And he responded that he hadn’t told the production company about my research. Wtf?

He didn’t say why, but I presume part of the deal was that he had to be discovering things onscreen at the same time as the viewer and so had to be able to feign ignorance. He did a great job of feigning. I foresee many starring roles in the Gaiety panto in his future.

To cap it all, I’m appearing myself in a short segment of one of the next episodes, presenting a piece of research that I didn’t do. Ironic or what?

The moral (to paraphrase Bismarck) is that genealogy TV is like a sausage. Best not to see how it’s made.

One of the many mixed blessings to emerge from the destruction of the Public Record Office in 1922 is the attention that we have been obliged to give to records that are fragmentary, or very local in scope, or just downright peculiar. After almost a century, however, it is hard not to feel that desperation has already forced us into every nook and cranny. There are just a few unexplored frontiers left, and estate papers are probably the most valuable of these.

Between 1700 and 1850 the majority of the population lived as small tenant farmers on large estates owned by English or Anglo-Irish landlords. Inevitably, the administration of these estates produced mouth-watering quantities of paper: maps, tenants’ lists, rentals, account books, lease books and much more. But the records are not systematic, vary enormously in the areas and periods they cover and in their level of detail, and in many cases have simply not survived. Those that have survived are scattered across multiple archives and libraries. As well as Ireland, many of the larger landlords also had holdings in England and Wales, and many records of Irish estates have ended up in English and Welsh archives. Tracking down these surviving records has long been beyond the stamina of all but the most stubborn of researchers.

The Landed Estates website (landedestates.ie), a project of the Moore Institute at NUI Galway, has been a precious beacon of light since 2008, bringing together precise location data, photographs, published material and information on the scope and location of surviving records for estates in Connacht and  Munster.  The level of detail is exemplary, providing an extrordinary insight into just how interlinked many of the landed families were. The integration with Google maps allows a visualisation of the relative positions of the estates, a good rough guide to an area you’re interested in.

Above all, the project should be providing a wonderful central storage point for all the information emerges in the future. However, nothing has been added for at least five years. What about all those juicy Headfort estate papers in Meath or the wonderful Ulster collection in PRONI?

Yes, the glass is nicely half-full. Please fill it.

Many times I’ve sung the praises of the Irish public service’s role in the recent revolution in Irish genealogy.  What happened, mostly, is that individual civil servants stuck their necks out to do what they saw as the right thing, not just for their own institutions but for the country and for the descendants of those who were forced to leave. Wonderful things we now take for granted – the online civil registration records, the National Archives census site, the National Library parish register images – are there not because there was an overarching master-plan (God forbid) but because individuals just did it.

The problem is that such decisions can all too easily be reversed. A small but worrying recent example is Ordnance Survey Ireland.  When they initially digitised their map archive, it was available on an expensive subscription website, presumably because someone in the office said “We’re sitting on a goldmine here, lads!” When it turned out not to be a goldmine, they sensibly picked themselves up and moved on, making the entire set free at maps.osi.ie. They made it possible to lay historic maps over contemporary aerial images, create direct links into the historic maps based on latitude and longitude, even customise layers on the historic maps to highlight graveyards or forges or asylums or turloughs – anything that was recorded on the original.

First, in a fit of copyright cold feet, (“But what about copyright, lads?”) a crude intervening map was overlaid on the historic 25″ and 6″ maps, making it difficult to zoom out and get overviews.

And now maps.osi.ie is completely gone, replaced by map.geohive.ie. Gone is the ability to link directly to locations. Gone are the layers of graveyards and forges. In their stead, is a new ‘improved’ system.

In defence of OSI, the old application was getting very old and insecure (“But what about security, lads?”). The main purpose of the organisation is to supply map services to other arms of the state, not to pander to a few heritage map nuts. And the maps are still there, still layerable and still free. They’re just not as searchable or accessible.

It’s a pity, not a tragedy. The real cause of the shiver up my spine is the evidence that wonderful decisions made ad-hoc can so easily be reversed.