Strictly speaking, “reverse genealogy” should mean searching out your distant descendants. Good luck with that.

What it usually means is sideways-and-forward genealogy, taking collateral family and tracking them forward to trace living relatives. And that really is close to peering into the distant future. You’re going against the grain of time and causality: your ancestors’ records show what they had done, not what they were going to do. Crystal ball time.

That much said, the appeal is obvious, especially to the descendants of those who left Ireland five or six generations ago. If you do manage to reconnect it can mean a whole new family and community to belong to, a wonderful thrill.

The producers of a genealogy TV show I once worked on were always hunting for that money shot, the revelation of family connections rediscovered, with the resultant outpouring of telegenic tears.

So it’s worth doing, and it can be done, but only with extra dollops of Irish genealogy’s two best friends, luck and persistence. Here are some of the main tools:

You can follow the changes decade by decade through the Valuation Revision Books (aka “Cancelled Books”).  In the Republic the Books are still only available in the Valuation Office itself. Bring a copy of the Griffith’s page and a good camera(-phone). Sometimes the records can be hard to disentangle and having something to chew over at your leisure is vital. The LDS Family History Library also has microfilm copies.

Even if none of your people were from (what’s now) Northern Ireland, it’s still worth having a look at the marvellous job PRONI have done on their Revision Books. They understood perfectly that the usefulness of the Books is in the time-lapse picture of holdings and occupiers and have organised their online copies to make that clear. The pity is that they end in the 1930s. As my father used to say, God never opens a door but he closes a window.

Just don’t try any of this with a Murphy.

If you do manage to reconnect, you can expect a much warmer welcome than forty years ago. Then, people here were wary of Yanks turning up on the doorstep, asking awkward questions about the plot of land left to their Grand-uncle Paddy that no-one in Ireland ever bothered to tell him about. We’ve chilled a bit.  Now that the statute of limitations has run out.

More on records for living relatives next time. If you’d like to see a walkthrough of one case, there’s one in this week’s YouTube video.

One aspect of genealogy I’ve always loved is that it can’t be mass produced. When you get past one or two generations, possible family connections mushroom with head-spinning speed. This is the very definition of scientific chaos theory: a butterfly flaps its wings in Venezuela and suddenly you have more fourth cousins than the entire population of New York.

Of course, this hasn’t stopped people (corporations) from trying. One of my earliest involvements in genealogy was with an American tour company advertising mass-produced family trees as part of a package tour of Ireland. It lasted one season, after the hapless tourist reps had to fend off outraged visitors waving their single-page reports and wanting the tour coach to go simultaneously to Cork (the Crowleys), Longford (the Kiernans) and Donegal (the Gallaghers).

Even the group behind the wonderful rootisireland.ie, the Irish Family History Foundation, started life as attempted mass tourism, a network of centres where the tour coaches were supposed to pull up for the tourists to file past researchers in white coats busy printing out their ancestry from giant bleeping computers.

And that little ad probably flashing at the bottom of the page even as you read this?  Just enter a surname and have their AI get your lineage back beyond Adam? Mar dhea.

Such ads also embody the belief that things have to be constantly simplified for researchers, which is the source of endless problems as sites try to shoehorn everything into the same over-simple framework. No! Complicate things!

This much said, I’m partly guilty of something similar. The step-by-step wizard on this site is an attempt to take whatever someone knows about their Irish ancestor and produce an nonthreatening summary of sources and links to get research going. It’s modest enough, just trying to apply the trigger-dates and locations to the information entered. A gentle kick-start, in other words. 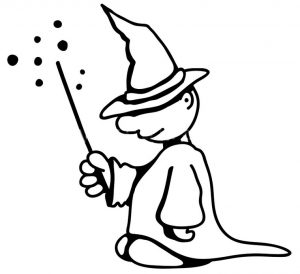 The latest YouTube video walks through the wizard a few times with different information. It’ll give you a sense of how much (and how little) the thing can do.

No wands, no pointy hats.