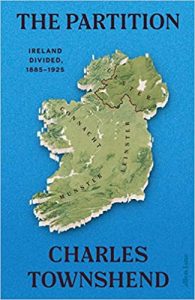 I’ve just finished reading Charles Townshend’s recently-published The Partition: Ireland Divided, 1885-1925 , which includes everything you could possibly want to know about the politics and violence that led to the creation of Northern Ireland in 1921. Like his masterwork Easter 1916: The Irish Rebellion, (Penguin 2015), it’s lucid, meticulous and dispassionate. At times, he goes into a bit more detail of conversations between the likes of Lord Birkenhead and Andrew Bonar Law and Hamar Greenwood than most people would want to know. But if you do want to know, this is where to look.

Slightly scary is the extent to which the pre-1921 era he describes mirrors our situation today. We’re currently having the same dialogue of the deaf, with Northern Unionists hearing every mention of a united Ireland as a threat to slaughter them in their beds and Southern (though not Northern) Nationalists blithely ignoring the fact that Unionism will never negotiate to unify the island.

As ever with Townshend, though, some of the most interesting parts of the book are the throwaway details. One that particularly caught my eye was a few sentences about the politicisation of the phrase “the Irish language” in the early 1900s.

When speaking to non-Irish audiences about Irish surnames, I repeatedly have to make the point that most of them have non-English-language origins in “Irish”. This is the name for the language used by everyone in Ireland today. But after saying it, to allay the puzzlement, I then have to add “by which I mean Gaelic”.  For a long time, I’ve been mildly irritated by this: Would ye not bleddywell learn the difference between Ireland and Scotland and call the language by its proper name?

Townshend puts a stop to my gallop. Describing the Gaelic League (still its name today, note, not “The Irish League”), set up in 1893 as a non-sectarian, non-political organisation to promote and defend the language, he writes “Early in the new century, Gaelicists began to talk of ‘the Irish language’ rather than Gaelic, automatically (and deliberately) rendering those who did not speak it as less Irish and those who did not even acknowledge its status as non-Irish”. This may be over-simple. The language had been called “Irish” as well as “Gaelic” for centuries. But he’s right about the exclusionary implication in the carefully-coined phrase “the Irish language”: this is the (only) language of anyone who’s Irish. The League had been captured by Irish Irelanders using the language as a marker of national purity.  That’s why “Irish” is now the standard term in Ireland (including Northern Ireland – I checked in the Belfast News Letter) and “Gaelic” has West Brit overtones.

Of course, if that vision of linguistic national purity had come about, I’d be writing this in Irish. And, to put it in Dublin English, I am in me Erse.