There are no genealogical records on the internet. There are garbled extracts, inaccurate transcripts, more-or-less complete copies with (if you’re lucky) an accompanying image. But there are no actual records. For anyone doing research online, this is a very basic point, but one that can be difficult to grasp. The original records are all offline, “reality-based” as Donald Rumsfeld used to say, in archives and manuscript repositories and presbyteries and books.

The reason to keep this in mind is the seductive ease of access that the internet allows. This can mask great gulfs in apparently continuous runs of records, or transcription errors compounding record-keeping errors, not to mention large gaps in the search interfaces themselves.

This is most apparent to anyone searching the (otherwise wonderful) Latter-Day Saints’ site, familysearch.org: records are lumped together and described with the broadest of brushes, making it difficult to be sure what exactly you’re looking at. Have I really searched all Irish marriages up to 1898? (No) Are these three separate records of three different events or three different transcripts of the same record?

And the same problems crop up on every record site. Parish registers that are listed as transcribed and searchable are somehow missing from search results, while General Register Office records not listed somehow appear in search results (rootsireland.ie). “Mc Dermott” and “McDermott” are treated as completely unrelated surnames (irishgenealogy.ie). Record images exist online, but for some reason remain untranscribed (census.nationalarchives.ie).

I know.  I have been both of those researchers.

One of the  virtues of genealogy is the fact that it’s almost impossible to industrialise. Every family is different, and the differences multiply exponentially with each generation back. Mass-production is impossible.

Hence the importance of do-it-yourself record collecting. Every Irish researcher depends inordinately on record collections created by stubborn individuals who just refused to give up.

The granddaddy of them all was Dr. Albert E. Casey, an Alabama pathologist who had ancestors from Sliabh Luachra on the Cork/Kerry border. If you know the area, you might understand Casey’s intense fascination – it is an extraordinary place, saturated in traditional Irish music, song, dance, poetry, and culture.  Sliabh Luachra people are different, and if you had some in your ancestry, you’d want to know more too.

Dr. Casey’s response to the black hole of Irish records was simple and awe-inspiring. He collected and transcribed every single record of any description for the region and adjoining parts, an area roughly bounded by the towns of Mallow, Killarney, Tralee and Newcastle: parish registers, civil records, property records, court proceedings, will indexes, newspapers, townland maps, gravestone inscriptions …everything.

And he didn’t stop there. He collected anything he could find relating to all of Cork and Kerry before about 1825, everything on Munster before 1625 and an extraordinary assortment of early printed and manuscript works covering medieval Ireland as a whole. The whole compilation was published in 16 giant, indexed volumes over the 19 years from 1952 to 1971, with the strange title O’Kief, Coshe Mang, Slieve Lougher and the Upper Blackwater in Ireland. You can see a full list of the contents at the Rootsweb Kerry site. His parish transcripts at least are searchable on the main Mormon website, www.familysearch.org.

One of Casey’s own medical articles reprinted in O’Kief suggests the depth of his desire to know where he came from. His “Odyssey of the Irish” compares a worldwide series of blood group and skull-shape measurements with those of the people of Sliabh Luachra and concludes that, unlike the rest of the population of Ireland, they originated in the Caucasus Mountains.  As I said, different – the last of the Fir Bolg, perhaps?

As result of his work, research on one of the most poorly documented parts of Ireland became much easier.  And it also began the modern tradition of Irish genealogical weirdo obsessives, in which I proudly claim my own place.

The lure of blue blood is a perennial hazard in genealogy, and by no means confined to Ireland. Witness the “Order of the Crown of Charlemagne in the United States Of America” (charlemagne.org) or indeed the Confucius Genealogy, claiming to go back more than 2,500 years and supposedly listing more than two million of his living descendants.

The basic mechanism is simple: someone looks into their heart and sees innate nobility, then looks around at their daily life and sees very little nobility indeed. The mismatch can only be accounted for by a mistake, a forgotten blood link to the truly noble. For most people, this is just a grown-up version of an eight-year-old girl’s Princess fantasy, but it can still be powerful enough to warp all logic and common sense.

In Ireland, the affliction usually involves a half-remembered family tradition – “my granduncle’s brother-in-law’s neighbour told me .” – or simple geographical proximity. Your ancestors were called Kelly, and came from South Roscommon, so they must be descended from the O’Kellys of Uí Máine. If you can just stretch your own family history back five generations and stretch the O’Kellys forward another five … Dealing with stuff like this sets any experienced researcher’s hair on end: you just can’t know the answer before you start the research.

A classic jibe of Victorian Ireland against the Gael was that every dirt-poor Irish tenant claimed to be a descendant of the old Gaelic aristocracy. The irony is that
there was probably more truth to the claim than Victorian superciliousness could allow. Medieval Ireland had an extremely high chiefs-to-Indians ratio, so there were enough nobles to guarantee that pretty much everyone had (and has) kings and princes in their family tree. It’s just impossible to prove. That warm glow of innate nobility will have to suffice.

And don’t forget that the tree still has a lot more Indians than chiefs.

The Macra na Feirme publication “Land Mobility and Succession in Ireland” (a good bedtime read, available here) reports that in 2011 a mere 0.3% of agricultural land in Ireland was put on the open market. It is an extraordinary figure. In effect, there is no buying or selling of farms in this country. Elsewhere in the developed world, most agricultural land is part of the normal stock of capitalism: invest capital to produce food to make a return on capital. Not in Ireland. 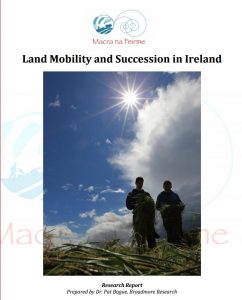 The historic reason lies in the colossal transfer of ownership from landlords to tenants that happened over the century from 1870. The biggest single change came in 1903, with the Wyndham Land Act, which made land transfer very attractive for both sides. The government paid the difference between the landlord’s asking price and the tenant’s offer and then lent the purchase price to the tenant. The new loan repayments were so close to the old annual rent that, for little or no difference in outlay, you went from being a tenant to being an owner. It was an offer almost no-one could refuse.

After generations of tenancy, the sweetness of that ownership created a ferocious attachment to the land, making it unthinkable that it could ever be simply sold off. Nearly all transfers had to take place within the extended family.

Which makes it possible to trace extended families in rural Ireland by following their property.

The Valuation Office records all changes to the holdings first surveyed by Griffith in the mid-nineteenth century and they remained the basis for local property taxes (“The Rates”) until abolition in 1977.

Anyone in occupation then (and now) is overwhelmingly likely to be related to the original purchaser. Second or third cousins twice removed, perhaps, but related. The revision books and maps for the twenty-six counties are open to the public at the Office premises in the Irish Life Centre in Dublin, with excellent guidance provided by the staff. The books for the six counties of Northern Ireland are free online at the wonderful Public Record Office of Northern Ireland site.