Since I first borrowed A for Andromeda  from Castlerea public library in 1964, I’ve been a regular reader of science fiction. It provides escape and reassurance in equal measure,  distorting the present in safe but stimulating ways, projecting well-worn history onto future landscapes. Space opera, á la Star Trek, is especially good at this.

But one aspect of genealogy has made it increasingly difficult for me to suspend the disbelief needed to keep space opera readable. As DNA studies expand knowledge of our deep ancestry, it has become crystal clear how interrelated we all are. And by “we” I don’t just mean human beings. We’re descended from the same original microbe as every living thing on earth. Those trees are your umpteenth cousins, umpteen times removed. The bacteria in your intestines helping to digest your food are more distant maybe, but still part of the family, still harking back to gtn-gt-granddaddy, the Methesulah microbe.

The point is that we’re not just related, our existences are utterly intertwined. We have spent 2.8 billion years co-evolving, depending on the peculiar seasonality of this planet, on the slow accumulation of soil, knotting ever-deeper symbiotic links between living things.

Human dependence on Earth is total. Our immune systems, our brains, our muscles all rely for their day-to-day existence on the intermeshed family trees that comprise life on the planet. To think about extracting one element of this whole, human beings, and throwing them through space to other planets is utterly absurd. It makes as much sense as sending a steak and kidney pie to the moon and expecting it to set up a colony.

That’s why I can’t watch Captain Picard any more. And that’s why your descendants won’t be researching you from their home on Proxima Centauri B.

A recent research case I had involved a woman called Christina Vance. Nicely unusual surname and forename, I thought. And sure enough there was her marriage in 1928, supplying her father’s name, and there was her death in 1936, supplying her age, 27. Subtract 27 from 1936 and you get 1908/09 as a year of birth.

Christina Vance’s birth duly popped up in 1908, daughter of Joseph, a signalman and Julia née Buggle. And there was the family in 1901, with sister Mary Vance, bridesmaid at the wedding. And there was the marriage of Joseph and Julia in 1894, fathers Edward Vance stationmaster and Patrick Buggle farmer. Johnny, said I, you may award yourself the Golden Egg of Self-Satisfaction.

So I set out to check out Joseph’s family more closely.   His death is listed in 1936, evidence that he wasn’t Robert, who was dead in 1928 according to the marriage record. And there, in 1929, was the marriage of his daughter Christina to Christopher Keane. A completely different Christina, unrelated to my Christina who married a year earlier just down the road also in north Dublin.

Back to the drawing board. Using my trusty wild-cards, I found the death of Robert Vanse in 1925, the birth of his daughter Christina Vanse registered in 1907, the family’s 1911 return mistranscribed as “Vause” in Summerhill, the marriage of Robert (again as “Vause”) in 1906, Christina staying with her granny in 1911 and mistranscribed as “Vanne” …

The moral? Trust the records. Distrust yourself. And make sure you really deserve that Golden Egg of Self-Satisfaction.

A few days ago I heard a full half-hour radio interview with Catherine Corless, the local historian responsible for tracking down the 796 death certificates of young children in the Tuam Mother and Baby Home between 1925 and 1961.  It was riveting.

She described in detail the first stirrings of curiosity about a place she had passed every day on her way to and from school as a child and the utter silence in official records about what had happened inside its walls. She had to go door-to-door, for all the world like a private detective, to recover local memories of the place and in the process came across a story of young local boys stumbling upon human remains. They were in what she found out was the abandoned septic tank of Tuam Workhouse that the Bon Secours nuns had used to store the remains of the children who died.

From then on, she was possessed by the idea of recovering the memory of those forgotten children and would let nothing stand in her way. The interview makes it plain that she had plenty of help – from the Galway Registrar’s office, who cut her a deal on the 796 certs, from Galway archivists and from locals in Tuam – but it is also clear that the passion fuelling the research was hers and hers alone.

The occasion of the interview was Catherine’s conferring with an honorary doctorate by Trinity College, and there has never been a more deserving recipient.

The interview sparked a few thoughts. First, if she were doing the work now, all the death records would be at her fingertips online. In March, I wrote about how her work could be replicated for other Mother and Baby homes. Just as an example, here’s a single page from Castlepollard death records from April 1947. Of the ten deaths recorded, eight are of infants from the Manor House Mother and Baby Home.

Second, her zeal for the full DNA-assisted identification of the children is awe-inspiring, but not unproblematic. It is certainly possible to recover substantial amounts of DNA from the children’s remains, but identifying them involves comparing that DNA with existing test results. These would almost certainly be genealogical tests, probably on GEDmatch.com or Ancestry, as in the case of the Golden State serial killer. Which means that the families of these children would more than likely be identified via descendants of their North American emigrant great-grand-uncles and aunts, with extended family trees leading (eventually) to likely parentage.

From listening to Catherine speak, I have no doubt she feels that these children have an absolute right to a proper burial, with each individual named and rescued from oblivion. But there is no way to do this without a massive state-sponsored programme of genealogical research. Apart from the expense, such a programme would almost certainly infringe the privacy of the extended families of the mothers who were incarcerated in these homes, as well as the privacy of the mothers themselves, many of whom would now be in their seventies.

I’m not sure how the balance will be struck, but it will have to be.

Wild-cards, – usually an asterisk (‘*’) representing any series of characters and a question-mark representing a single character – are one of the most important (and under-appreciated) tools in any online researcher’s toolkit. The garbled English versions of original Irish-language surnames and placenames we work with in Ireland make them doubly important. Here are a few hard-earned lessons.

So you should never rely completely on any site’s built-in variants system. The best – IrishGenealogy and FamilySearch come to mind – allow maximum flexibility, running all the way from  returning all variants of any name matched anywhere in the search, through all wild-carded versions of both forename and surname, to exact matches only. At the other end of the spectrum, AskAboutIreland’s Griffith’s search will just put invisible wild-cards around the surname if you tick the “similar names” box. And in between come:

Most sites that allow wild-cards have restrictions. For example, a search with a wild-card as initial letter is usually verboten, because of the strain it puts on the server. Not me. I proudly strain my CPU in your service – *or?m Most also specify a minimum number of characters. Again, not me.

So, for example, ‘B*urk*’ will find Bourk, Bourke, Burk, Burkett …  Remember that consonants tend to be more stable than vowels. Very often simply replacing all the vowels in a search term with asterisks will provide a useful list of candidate results.

Above all, experiment with wild cards. Would you like to see all Rootsireland baptisms in Carndonagh between 1865 and 1875 with a godmother called Mary? No problem: 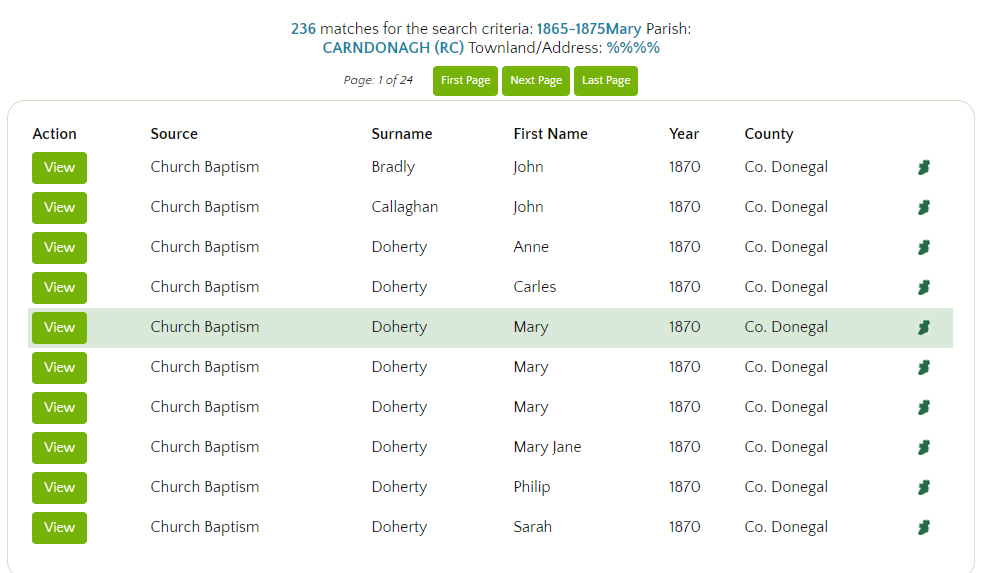