History of heraldry in Ireland

Heraldry is the study and description of coats of arms, and of the rights of individuals and families to bear arms. It began in the first half of the twelfth century, as a result of developments in medieval weaponry and armour in continental Europe. The old coats of chain-and-link mail, with long shields, gave way to full-body plate armour and helmets encasing the entire head, with smaller triangular shields. Individual knights thus became completely anonymous. The necessity for markings on their shields to identify themselves in battles and in tournaments is self-evident.

At first, this military necessity was the determining factor. Large, clearly identifiable patterns, involving two or three colours divided into a number of compartments related to the physical construction of the shield make up the earliest arms. Later, when animals and other symbols were added, the necessity for easy, quick recognition again meant that a large degree of stylised convention was used, so that the heraldic lion, for instance, bears only a slight resemblance to the real thing.

The military origin of arms is also the most likely explanation for their emergence at almost exactly the same time in England, France, Germany and Italy. The eight Christian crusades against Islam between 1096 and 1271 involved knights from all of these countries, and, combined with the changes in armour, provided a context in which a system of military recognition was essential. The endurance of heraldry is no doubt partly due to the fact that it spread over the whole of Europe virtually simultaneously. Crosses and fleurs-de-lis, Christian symbols par excellence, also take their origins in heraldry from the Crusades.

Fitzgerald coat of arms
But heraldry would long ago have died out completely if the only need it met was military. Individual recognition and family identity are powerful and universal human needs. And towards the end of the thirteenth century, a further change came about as the social and non-military aspects of heraldry evolved and it was established that coats of arms were personal and hereditary. The symbols used could now relate to the name, the office or the territory of the bearer, and were dictated less by the imperative of immediate recognition. One of the results from this period on was the creation of so-called "canting" arms, based on a pun on the name - in Ireland, the arms of the Aherne family, displaying three herons, are an example. The main non-military use of arms was on seals, as a means of proving the authenticity of documents, and the practice of using birds or animals to fill empty space around the arms on these seals gave rise to "supporters", now regarded as part of the arms of peers. Eventually, arms were also used on tombs, and then on works of art and possessions.

The symbols used in heraldry have a variety of origins: in the Christian nature of the crusades, in the (supposed) character of the individual or family itself, in some event which is identified with the family. There is no strict attachment of significance to particular symbols, although the reasons for some symbols are self-evident; the lion is conventionally regal, the unicorn is a symbol of purity, the boar is a Celtic symbol of endurance and courage, and so on.

As arms proliferated, a natural need arose for rules to prevent different individuals and families using the same or similar symbols and arrangements of symbols. The first result was the evolution of the peculiar technical vocabulary used in describing arms, a highly stylised and extremely precise mixture of early French, Latin and English, still used in heraldry today. Then came the creation of the offices of King of Arms or King of Heralds throughout most of Europe in the fourteenth century. The principal functions of these were the recognition of arms, the recording of the possession of arms, the granting of arms and adjudication in disputes between bearers of arms. By the end of the fifteenth century, since the right to bear arms depended on family and ancestry, they had also become genealogists.

A detailed examination of heraldry in Ireland is available in the Genealogical Office section of the National Library of Ireland website. 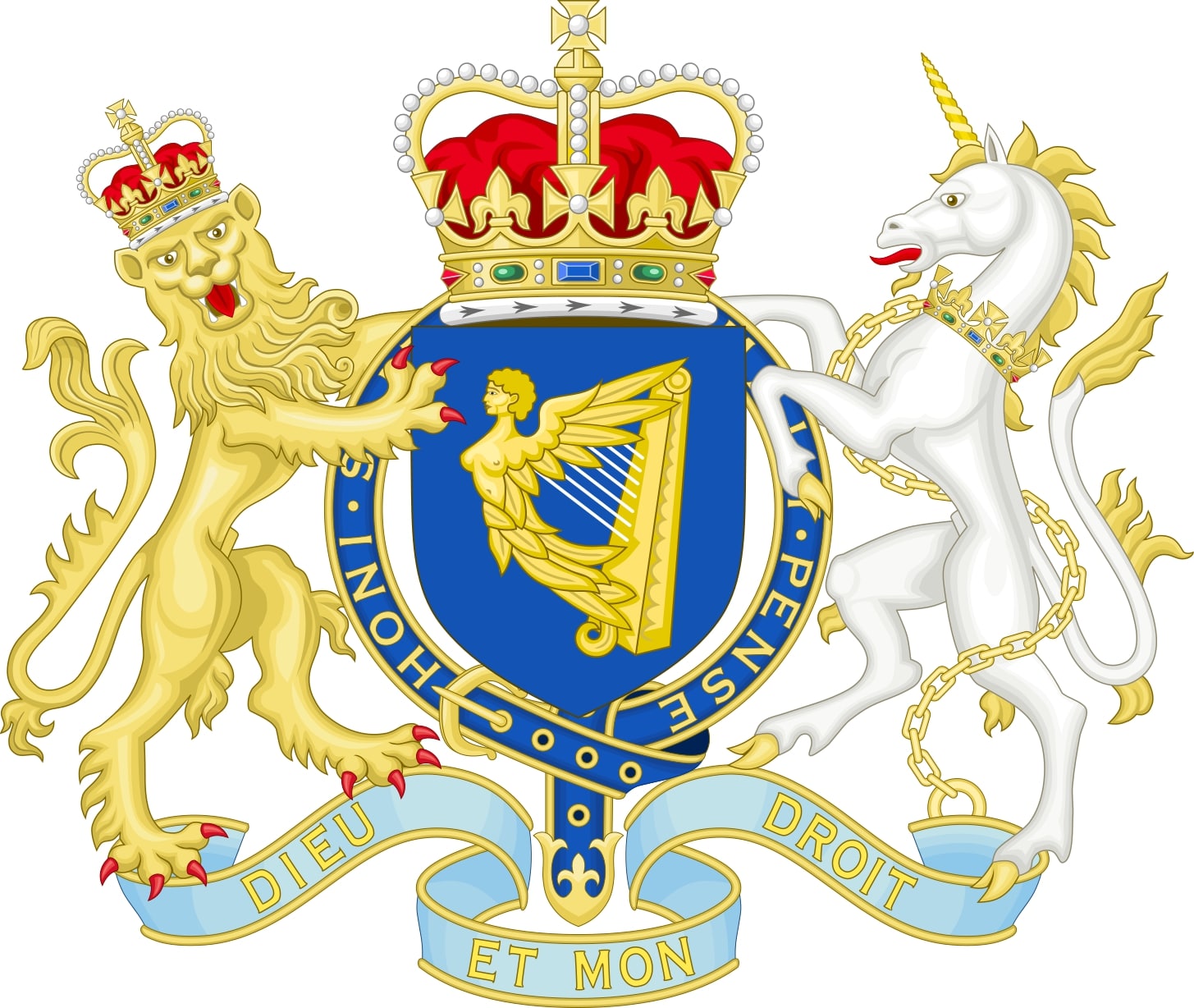 Arms of Ireland, after 1707, with crest, supporters and motto