From the numbers of Irish, Scotch and English listed in Pender's 'Census' of 1659.


The decision to call the work on which this map is based a 'Census' was a serious misjudgement. It is nothing like a census.

Two classes of people are recorded. The first, 'tituladoes', are so called because they claim title to the land they occupy and because that title is in question. (The OED defines titulado as "A thing that has only a nominal existence.") Their names and townland addresses are given in full. Because they represent the tiny property-owning class, their numbers are few.

More interesting is the second class, "Inhabitants". These are described as English, Scotch or Irish, their surname (or a rough version of their surname) is supplied, along with their number. These numbers are for baronies, so the areas they cover are much larger than for the tituladoes. 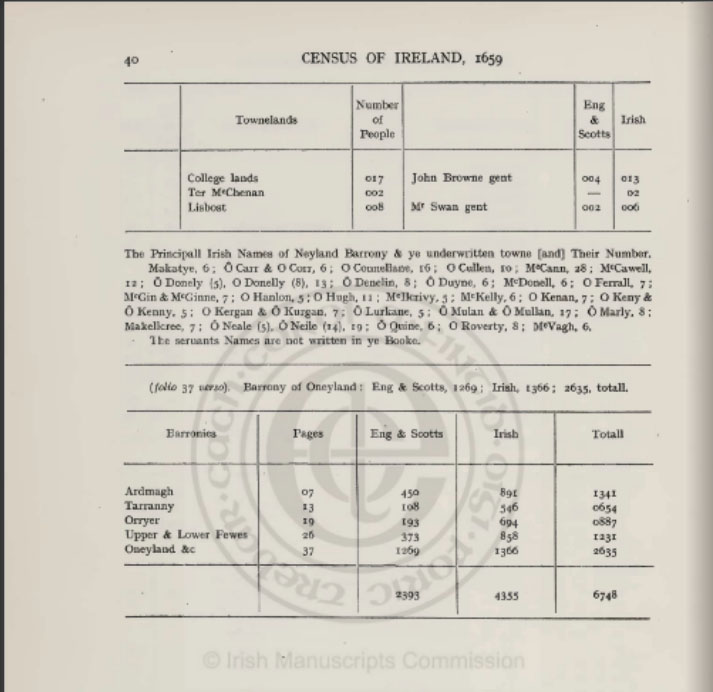 Clearly, the 'Census' was part of the preparatory work for the mass confiscations that took place under the Cromwellian Commonwealth. Although the returns differ in format from one part of Ireland to another, they were designed to answer two simple questions: Who is in possession of the land? (the tituladoes) And who is likely to oppose or support their dispossession? (Numbers of English, Scotch or Irish)

Even on its own terms, the 'Census' is flawed. It is missing all of counties Cavan, Galway, Mayo, Tyrone and Wicklow, most of Meath (nine baronies) and four baronies in Cork. The Inhabitants of Fermanagh and Leitrim are recorded in composite groups of parishes, not baronies as elsewhere. And the recording of surnames is inconsistent beyond belief.

All of which makes the work of mapping the Inhabitants to the localities a little queasy. The implied precision in points on a map is misleading. Treat the maps with caution.

This much said, Pender's 'Census' has one unassailable virtue: It exists. Almost no other records survive for the Ireland of this period.

It was published by the Irish Manuscripts Commission in 1939 and is available online at the IMC website. A good plain transcription, lacking the academic apparatus, was at the Clann MacLochlainn website.