The central event for anyone researching Irish history is the destruction of the Irish Public Record Office in 1922. For the previous century-and-a-half, Ireland had been methodically measured, counted and recorded unlike anywhere else in the then United Kingdom of Great Britain and Ireland, precisely because it was contested territory. We had the first censuses, the earliest systematic maps, the first centralised police force, the first uniform property taxes, the first island-wide legal system.

And from 1867 we had a wonderful state-of-the-art Public Record Office to secure the records of all that activity.

The broad outlines of what happened in 1922 have long been clear. The opponents of the 1921 Anglo-Irish Treaty occupied the Four Courts campus (which contained the Public Record Office) in April 1922. Their aim was to force the Treaty signatories, their former comrades-in-arms, to choose between upholding the Treaty and starting a civil war or resuming the war against Britain.

On June 28 1922, after an ultimatum was rejected,  the pro-Treaty forces began an assault and bombardment of the Four Courts that resulted in the complete destruction of the PRO and all the contents of its Record Treasury three days later, on Friday June 30.

There followed almost a century of tit-for-tattery over who was to blame. Anti-Treaty zealots who mined the entire complex and wanted history to restart from Year Zero? Or incompetent Free-Staters using British Army artillery they couldn’t control?  Take your pick: Fianna Fáil or Fine Gael? 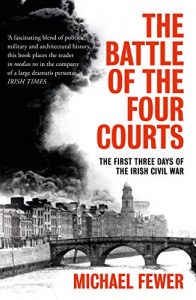 And there was always a convenient haziness around the exact sequence of events over that week in June 1922. No more. Michael Fewer’s The Battle of the Four Courts: the first three days of the Irish Civil War (Head of Zeus, 2019) is a meticulous work of micro-history that assembles the story hour-by-hour  weighing maps and photographs against eye-witness accounts to reconstruct an utterly convincing version of what happened.

As Fewer tells it, there is plenty of blame to go around. 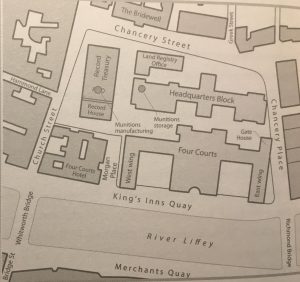 The Anti-Treatyites stored their huge supplies of munitions in a building adjacent to the Record Treasury (the “Headquarters Block”) and booby-trapped it with fire-bombs.  The Free-Staters breached the defences of the complex by blowing a large hole in the Church Street side of the PRO Reading Room and attacking through it.  The attack triggered the booby-trapped munitions and the resulting explosion was immense.

The explosion demolished most of the block and started a ferocious fire. It did not destroy the Record Treasury, but blew out all of the vast glass windows and left the records at the mercy of the holocaust.  It took hours for them to be consumed, while the Dublin Fire Brigade looked on helplessly, unable to intervene for fear of further explosions. After it had burnt itself out, everything in the Treasury was gone.

The simple fact is that neither side cared a damn about the records. They were young men prepared to kill or die for their beliefs about the future. What did the past matter?

There are some positives from what happened, if you squint really hard. First, 1922 simplified Irish research, though perhaps only in the way  that Cromwell simplified Ireland. It is also one of the main reasons so much basic Irish material (the bits that survived) is so widely available for free on Irish government websites such as irishgenealogy.ie, genealogy.nationalarchives.ie and registers.nli.ie. Never underestimate the power of institutional shame.

There are also attempts to put things right. The successor to the PRO, the National Archives, is very gingerly restoring some of the burnt bits in time for the centenary. And Beyond 2022 is aiming to repopulate as many of the empty Treasury record bays as possible. Good luck to them.

12 thoughts on “How the Public Record Office burned”