A few years ago, Cork historian Barry Keane came across a Home Office file in the UK National Archives, HO 317/78, “Activities of named paid informants against Irish secret societies”. (The wonderfully bland online catalogue entry is here.) It covered various years between 1886 and 1910, but almost all of it had been redacted. When Mr Keane appealed to the Home Office for the missing information, the entire file was withdrawn. He requested a review under the Freedom of Information Act, was turned down, appealed to the Freedom of Information Tribunal and finally lost that appeal after a two year wait.

His appeal was rejected on two grounds. The first was precisely the reason our own Central Statistics Office gave for not releasing the 1926 census: if people know they might be identified three generations into the future, they won’t co-operate now. This was laughable when put forward by the CSO, and even more so when a Metropolitan Police officer – behind a screen at the appeal hearing, no less – claimed that making the century-old informers file available would put the entire UK covert human intelligence system at risk. A very sensible minority dissent on the tribunal described this argument as “self-evidently absurd”. 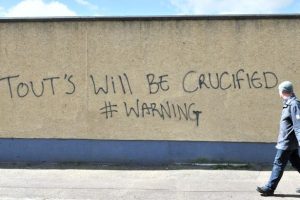 The other reason for refusal, that descendants of those named in the file might be in danger, or exposed to opprobrium, is less absurd. Maybe Cork is now all forgiveness and sweetness and light, but I’m not so sure about elsewhere in Ireland. After a talk I gave in Armagh a few years back, one of the audience questions was from a woman who wanted to know where the historic files naming “the touts” were stored. I don’t think she was researching her own ancestors.

I’m with the tribunal majority on their decision. In Ireland, some things just take longer to become history.

You can make up your own mind: the full official transcript of the hearing is on the tribunal website.

13 thoughts on “We have history”