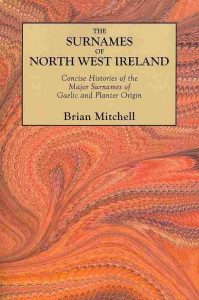 All of them work to a similar format: summarise received wisdom about surname etymology and meaning; give rough geographic distributions; list well-known bearers of the name. They are essentially dictionaries focused on elucidating the surnames themselves, which makes them mainly of interest to bearers of the surnames and to local historians.

I’ve produced plenty of similar potted histories myself, and found it very hard. So hard that at one point in the early 90s I ended up inventing a ‘well-known’ bearer of a surname, complete with fictional back-story. And then forgot which surname it was. So somewhere, I think on this site, is a non-existent famous person. I believe (though I can’t be sure) that I was channelling The Scarlet Pimpernel.

More seriously,  the study of surnames, in particular surname distributions, can provide decent historical evidence, especially now that technology allows historic data to be mined and examined in novel ways. One example is  mapping surname variety across Ireland in the mid-19th-century Griffith’s Valuation census substitute. Simply take the number of distinct surnames listed as householders in each county and divide by the area of the county. The result is an average number of different surnames per area.

Unsurprisingly, Dublin has the densest concentration of names, but the area with by far the next greatest variety is the ancient tuatha of Oriel, comprising Armagh, Louth and Monaghan. The western seaboard counties (with the exception of Sligo) have surname densities far below average, even though they were the most highly populated areas. The northeastern counties, with their mix of Scots-Irish and Gaelic-Irish, have surname variety well above average. The clear conclusion is that surname variety or density is a respectable proxy for cultural diversity. Or cultural purity.

Plenty of onomastics like this can be found at the Society for Name Studies in Britain and Ireland, snsbi.org.uk.