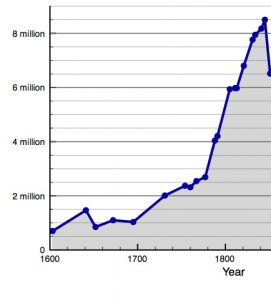 Between 1780 and 1845, the population of Ireland mushroomed from about three million to about eight and a half million. That much is well known and often cited as one of the reasons for the catastrophic devastation of the Great Famine of 1845-49. But such a vast increase must also have had a profound effect on family relationships.

Look at the numbers. The population tripled in size over less than three generations, a veritable explosion. And the growth wasn’t evenly spread, taking place disproportionately among the vast mass of Gaelic Catholic subsistence farmers in the West and the South. Someone born in those areas in the 1820s and 1830s was typically one of a very large family, ten or more, whose parents and grandparents would also typically have come from families the same size. So if your twenty aunts and uncles did their demographic duty, you could easily have two hundred first cousins, all almost probably living within walking distance.

And more distant cousins? Second cousins are all the descendants of a common set of great-grandparents. Taking the same average of ten per generation, you could easily have had more than four thousand of them, again almost all in the same geographic region.

Child mortality and (pretty much unavoidable) cousin intermarriage might reduce some of those numbers, but the point still stands. Immediately before the Famine, some areas of Ireland were populated by extraordinarily dense cousin networks.

Gaelic society had always been tribal, but this was tribalism on steroids. Everyone was literally closely related to everyone around them. No wonder Ancestry’s DNA service is so good at identifying genetic groupings in particular areas of Ireland – the period 1780-1830, the outer limit of its standard autosomal DNA test, is exactly the period when we very obligingly got together and married our cousins like rabbits.

Cousin-density like this also left its mark on a more recent Ireland. Membership of the two main political parties, Fianna Fáil and Fine Gael, often appears to be inheritable, with great masses of relatives voting for (or knifing) each other .

And that great population bulge may be another reason why it’s so hard to get your ancestral line back beyond 1800. Four thousand Jams O’Donnell second cousins?